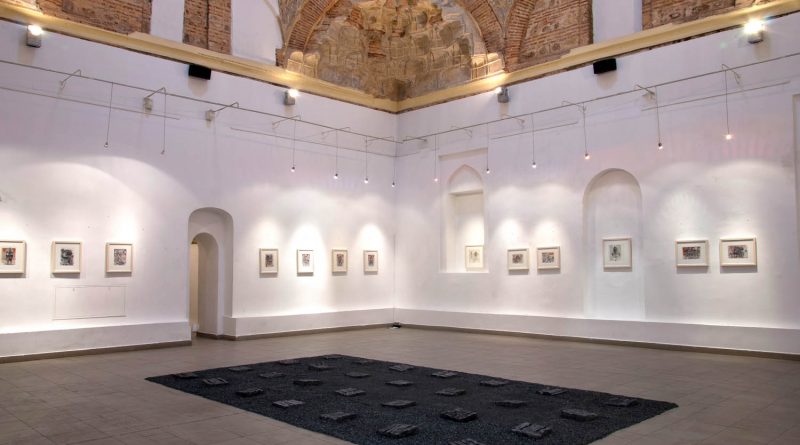 The National Gallery was established in the middle of the twentieth century as a professional institution in which Macedonian and Yugoslav art would be collected, preserved, presented, and affirmed. The initiative for establishing such an independent museum-gallery institution was encouraged by the Association of Fine Artists from Macedonia, together with the cultural and social public, and with the support of the Government of the Republic of Macedonia.

In 1951, the grand opening of the gallery took place and the first permanent exhibition was presented to the public, which is a major step in the field of cultural uplift of the Macedonian people. Icons from the 14th to the 19th century were exhibited, copies of the most beautiful examples of Macedonian frescoes and works of art from the then Macedonian and Yugoslav contemporary art, and a catalog was prepared with a text in which a brief overview of the Installation.

The exhibition “70 years since the first National Exhibition (1951-2021)” features more than 100 authors with about 150 works of art (paintings, watercolors, drawings, graphics, and sculptures) donated and purchased in the period from 1948 to 1951, as a reminder to current and future generations of the main activity of the Gallery, whose healthy foundations were laid in the distant fifties of the twentieth century and its success story of a temple of art and stimulant of the cultural life in Macedonia.

From its beginnings until today, except for Daut Pasha Amam – the original space in which it develops and which to this day is a symbol of a center where important artistic activities take place, the National Gallery is enriched with 3 more spaces: Chifte Hamam; Mala Stanica Multimedia Center and the Museum – Memorial House of Lazar Lichenoski. The mentioned spaces today are important cultural/cult places in the city, of which 3 have been declared cultural monuments, adapted spaces in order to merge two important moments in one – protection and presentation, which speaks of the desire to use the potential of diachronic identities and realities for the presentation of works in monumental museum buildings with authentic appearance and recognizable cultural and ambient value, whereby the movable cultural heritage is protected in immovable cultural heritage.

The permanent exhibition is a complex process of selection of works and development of an exhibition from concept to realization, with challenges that should maintain relevance in the long run. An additional element of challenge is the already existing space, which, according to the appropriately combined historical-stylistic methodology, will offer a narration that is understandable and communicates with different categories of audiences, remaining consistent with the qualitative imperatives.

The first exhibition, in accordance with the historical conditions, opened in 1951, when Macedonia was part of the then Yugoslav community, following a chronological range from the middle and end of the XIX century, as well as the first half of the XX century. With this, the audience then had the opportunity to see works of classicism and romanticism, painted by the great figures of Serbian, Croatian, Slovenian, Bosnian-Herzegovinian, and Montenegrin art.

The exhibition of authors and works that were presented 70 years ago should be a reminder of the enthusiasm with which the National Gallery was formed, and the desire for it to grow into a representative center of Macedonian visual art, but also an educational center where young generations will get to know culturally historical and aesthetic values presented in the oldest art institution of this type in our country.

DMWC guided a tour of the exhibition entitled “The permanent exhibition of the National Gallery – a postulate for the growth of Macedonian culture” at Daut Pasha Amam. It is the celebration of 70 years since the establishment of the first permanent exhibition of the then Art Gallery – Skopje, today’s National Gallery of North Macedonia, another reminder of the successful working beginnings of our institution. After having a guided tour, we were welcomed with coffee/ tea by Mrs. Dita Starova, the Director of the National Gallery at the yard of the Daut Pasha Amam.