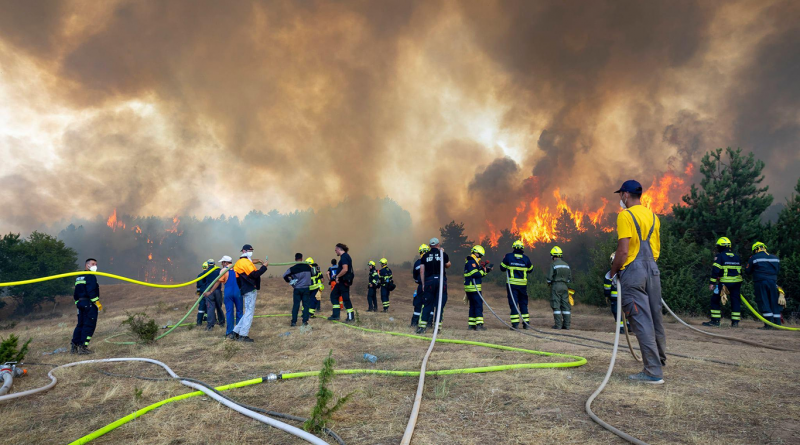 The Balkans, North Macedonia, year of our Lord 2021.

Hot, perhaps the hottest in history, dry as in a desert.

Throughout the years and the centuries, many travelers, armies, peoples have passed through this territory, some with a purpose, some without. Some were welcomed, some were resisted and fought.

This summer of our Lord shall be written in the memory of this piece of land as a special summer, the hottest summer, and the fieriest. Armies that this piece of land has not seen, armies of salvation came here from many countries.

The Balkan was burning, fires were turning hundred-year-old trees into ashes, homes both of people and animals were burning. The fire destroyed everything on its way, as never before.

As never before, help came from everywhere, for the first time on this piece of land representatives of the international community fought alongside Macedonians against the fire. Bizarre as it may be, in those hellish moments, Northern Macedonia was part of the European Union. The fire brought European solidarity to Macedonia. European assistance was sent through the mechanism for civilian protection of the EU, and the European Commission took on at least 75% of all transport costs.

The EU rapid response mechanism at that time dedicated itself to Macedonia and sent the best possible help and defenses. Berovo, Pehcevo, Delcevo were burning, and the surroundings of Kocani, Bitola, Gevgelija, Staro Nagoricane caught fire.

They came equipped with utmost technical sophistication and precision; they were personally welcomed on their way to and from Macedonia by the Regional Fire Brigade Commander Dietmar Fahrafellner.  Their equipment is fascinating, from the kitchen, food, and water to special utility vehicles, drones, and a command center that looked as if it were from Star Wars. They put up their camp swiftly and discretely. The hoses that the firefighters brought with them for the combat with forest fires, transported and expelled the incredible 500.000 cubic meters of water. Yes, half a million cubic meters. A resident of Maleshevo very well summed up our impressions of the equipment brought by Austrian firefighters: we experienced a culture shock.

Slovenia sent their best tacticians, their equipment could not have been better. The Slovenians were already cutting down the trees hanging over the unmaintained forest roads and paths, clearing the way for the movement of firefighting equipment, while the hosts were still organizing themselves, having no list of experienced local loggers.

Romania joined the effort with an enormous firefighting aircraft. Bulgaria on the other side of the border fought wholeheartedly to contain the fire that was getting dangerously close, respecting no borders, at the time when the fires near Sandanski had already claimed two lives.

Or, as the Macedonian saying goes, it is complete only when there is everything…

At times, over 30 serious forest fires were active, it was an unprecedented challenge.
They fought for every millimeter, for each tree, against each breach of the line of defense that could turn the whole mountain into ashes. Each burnt tree was a loss for all the countries that assisted. If there are fewer trees here, there will be less oxygen everywhere. European firefighters fought as if the forest was their own. To use a popular fairy tale trope, as “good servants” all together they prevailed over the “evil master,” the fire.
The fires were extinguished, the heat abated, but a warmth remained. The warmth in the hearts of those who had come to help us to fight the fires, the warmth they felt when the locals gave them a send-off. Cleaning up together with the Austrian firefighters, the warm farewell to the Slovenians…

The statement of a local resident to a European journalist about the Austrian volunteers and their commander: “The brigade commander is quiet and efficient, unlike all our ‘cowboys’ who produce more noise than results.”

The scale of devastation caused by the fires is illustrated by the fact that two scary foxes were so hungry and desperate that they started stealing sandwiches from the firefighters. The radius of the fire in Berovo, Pehcevo, and Delcevo reached up to 50 km.

We should remember this experience and apply the tactics used by international firefighting crews, and reform the system urgently, effectively, and in accordance with the law. We should buy the equipment that we have seen in action and that has proved to be appropriate for our conditions, but the setting up of a system should precede the procurement. Otherwise, the procurement will be random and wrong equipment will be bought.

But Macedonia also has something to be proud of: Pelister National Park has a functional modern system for managing forest fires. It was purchased and donated by the UNDP nature protection program and includes SUVs with special flexible modules for forest fires designed and manufactured in Macedonia, and using improved water mist technology.

The characteristics of our thermal drone are the same and, in some cases, superior to the characteristics of the drones used by international crews. Many fires on Pelister were detected and extinguished on time this summer, preventing a second fire the size of the Maleshevo one, if not bigger. The firefighting personnel was trained in the First Macedonian Academy for Forest Fires established in 2020, just one year before the hellish fires of the summer of 2021.

In 9-10 months, the season of wildfires will come again.

Have we learned anything from the operational tactics of the international crews, their use of equipment, and their logistics or will we expect help from them once again?

That will soon be found out!

Let me close with some excerpts from my conversations with Commander Helmut Schuecker of the Austrian contingent. Firefighting standards in Northern Macedonia are completely different from those he is used to in Austria. It’s unthinkable that one firefighter with an old and poorly equipped vehicle is “responsible for an area of 80 square kilometers.”

Sometimes with a small gesture, we can initiate a big change by setting an example. “We didn’t want to leave any garbage behind, so we collected all the litter, even the stuff that was not ours. The local young men immediately joined in, took the plastic bags from our hands, and collected all the scattered bottles. Such an action has a great effect because glass can cause a fire.”

“Our mission was good in many ways. Getting to know other teams were valuable, in this line of work you have to rely on others, it unites,” concludes the Austrian commander. “Perhaps, we will never experience this again.”