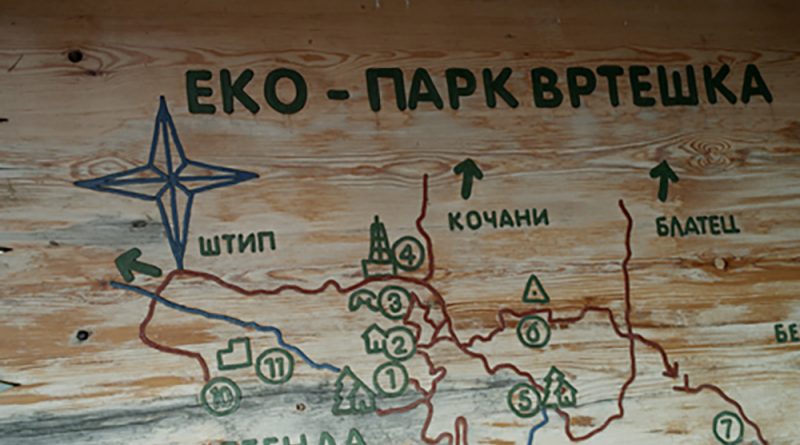 Once upon a time, in the time of the Paeonian kings, a water dragon, similar to the Chinese ones, lived in the river Bregalnica, defending the Holy City. But, over time, the water level in the river decreased. So, the dragon retreated into the womb of Plachkovica. Waiting for the water to come back and win his water kingdom again.

All the legends about this area speak about the waters and the so-called Holy City on the mountain Plachkovica. There, once lived a woman who had the power to heal.

Another legend tells about Philip II, the father of the future king of the Macedonians Alexander, that brought the baby Alexander to her to cure him of the crying attacks that tormented all the courtiers.

She took the child in her arms and said that there is nothing wrong with him. He has an enormous amount of energy, which he releases through crying. She predicted that he would become the king of the world and surpass his father’s fame. Philip II and King Lipius, the king of the Holy City, wept for joy and relief. Their cry brought the name of the mountain Plachkovica.

Plachkovica has three canyons: Kamnik, Kozjak, and Zrnovka with high rocks, rivers, waterfalls, overpasses. The rivers on the north side have deep valleys and a large longitudinal slope. Thus, on the Zrnovska River, there are more rapids, waterfalls, and giant pots.

For many, Kamnik Canyon is a small Colorado with its beauty. All canyons are provided with the necessary infrastructure for smooth movement (markings, billboards, signposts, cables, ferries, and a place to rest).

Plachkovica Mountain has numerous caves, of which only five have been explored and are accessible to visitors.
The largest is the so-called “Great Cave”, examined at a length of 600 meters. It is a real pearl with its cave decorations and is a constant challenge for speleologists. Zup, Ajduchka, Turtel, and Ponor are smaller but easily accessible to visitors. Marked paths lead to them.

In the villages of this tame and water-rich mountain live a people who call themselves “Yuruci”. The Yuruks come from the Turkish region of Konya. They came to Macedonia and the Balkans in the 14th and 15th centuries with the conquests of the Ottomans.

The Yuruks, as ranchers, provided food for the Ottoman army. In fact, they were some kind of intendants. In time they settled in the high mountains and to this day remain faithful to tradition.

Yuruk women still wear colorful costumes in vivid colors every day and are active guardians of tradition. The ancestors of Kemal Ataturk – the founder of modern Turkey – were Yuruks.

Be sure to end your trip to Plachkovica in Vinica. Here they say that in the past, due to lack of water, the houses were built with – Wine!

This idyllic town is known for the Terracotta icons found on the Vinica fortress. They illustrate biblical texts and are written in Latin. Each has a cross. They date from the end of VI to the end of the VII century. They are similar to those found in Tunisia dated from the V and VI centuries and represent one of the most exclusive findings of Macedonian archeology.

Eh, this wonderful country of mine.