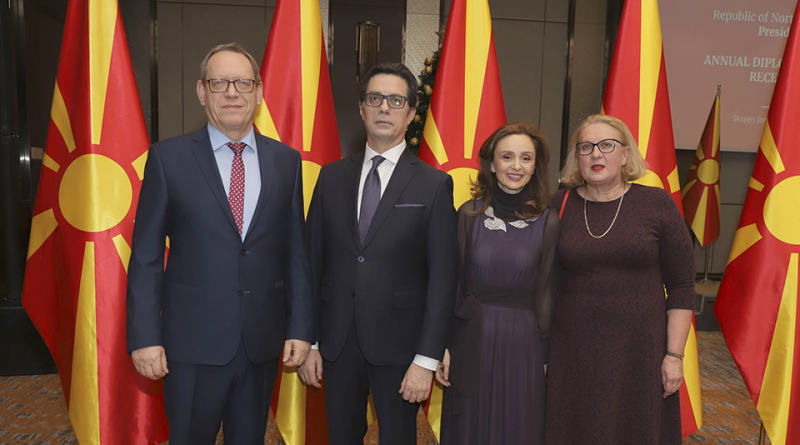 Your Excellency, Mr. Ambassador Tyciński, you are on duty in North Macedonia since 2018th. What are the things that left you an impression during your stay here?

My impressions after coming to Skopje could only be compared to what I saw here during my first visit in 1993. At that time, I was a member of the 1st Polish governmental delegation that came to the Republic of Macedonia at the time to talk about the development of our relations. The city, the people, and the society were different. After that, I wasn’t here until my arrival in September 2018 as the ambassador of the Republic of Poland.

From this perspective, I would like to mention three things that I can clearly see after almost three years of stay. First of all, a very positive attitude of Macedonians towards Poland. Secondly, the beauty of your country – both the landscape, as well as historical and cultural impressions. And thirdly, a real interest in developing ties with Europe, with an EU in which so many people, especially young people, see their future.

Poland and North Macedonia are two countries with very good bilateral relations, on a very high level equally in political, economic, and cultural fields and they share many similarities. In your opinion, what is the biggest similarity between the two countries and people? In regards to the previous question, according to you, what is the biggest difference between the Polish and the Macedonian people?

Speaking of the similarities between our countries, I will mention those that have had a negative impact on the development of Poland and the area that now forms North Macedonia. I am thinking of lack of the statehood – for the very long time period in the case of Macedonian lands and a long period in the case of Poland. We were divided between Russia, Germany, and Austria for 123 years, while the Macedonian lands were part of the Ottoman Empire for several hundred years. In both cases, the effects were similar – the dramatic lack of democratic traditions in our countries.

The differences in our historical development have a strong influence on the present situation. For centuries – until the partitions – Poles enjoyed having their own state. Unlike you, we experienced the effects of the industrial revolution, becoming the most developed part of the Russian Empire in the second half of the 19th century. Another difference is our membership in the EU since 2004. It has fundamentally influenced the direction of our development in recent decades.

When talking about people and societies, it should be remembered that we come – Poles and ethnic Macedonians – from one Slavic trunk, which affects considerable cultural and linguistic similarities. I think we are similarly hospitable and open to contacts with representatives of other nations. This is one of the reasons why Poles are so eager to visit North Macedonia.

However, there are also serious differences between our societies. Until recently, Poland was an almost homogeneous country in terms of ethnic composition. There is therefore much greater cultural and linguistic diversity in North Macedonia.

What is your opinion on the current state of affairs in the relations of North Macedonia and Poland? Is there anything you would like to improve, or change?

Our relations have been good, and even very good, for years. Poland, as an EU member state, comprehensively supports the process of internal reforms in North Macedonia. Together with our friends from the EU, we will continue to work to speed up the process of your full integration with the EU after the opening of membership negotiations with North Macedonia. This is our greatest common challenge for the near future.

For other matters, as usual, economic cooperation is important. North Macedonia needs capital, investment, technology transfer, and well-structured trade. In our mutual relations, there is a lot of room for development in this area.

Your diplomatic portfolio is quite extensive, and you have been involved in Polish international politics since the early 1990’s. What kind of experience can one get after being 30 years involved in representing the international matters of his country?

Indeed, I had the pleasure of working as a diplomat in Canada, Great Britain, France, and now in North Macedonia.

What are the advantages of such work? Certainly one of them is the opportunity to get to know the country in which you are staying for several years. It is about its inhabitants, history, culture, politics, traditions, etc. It is certainly something that enriches us a lot as diplomats.

Another advantage is our long exposure to other social and ethnic environments, different cultures, and languages. This is connected with another issue, with perceiving by us the world and international relations more with looking for mutual dialogue and understanding than with conflict and emphasizing the differences between states, societies, and people. And this is exactly the essence of diplomacy.

What will you recommend to your compatriots to the visitor experience, if they ever come to North Macedonia?

North Macedonia has several important assets that are important to potential tourists. Three of them are the most important. First of all – it is the nature you have, vast and quite wild mountains, and also beautiful, crystal clear mountain lakes. It is a great magnet for those who like to relax in nature, for example at Lake Ohrid. I also know from my experience that your country attracts – among others from Poland – active travelers who prefer to spend a few days doing hiking in the mountains instead of just staying on the beach by Lake Ohrid. Of course, this lake stays the main attraction for most people coming to this region.

The second great asset of North Macedonia is your history and its material evidence – ancient cities and medieval monasteries and churches. These are tourist attractions on a European scale and it is definitely worth promoting them, as Dobredojte Macedonia Welcome Centre does.

When talking about the attractions of North Macedonia, it is impossible to ignore the human factor. Macedonians are generally very friendly, open, and hospitable people and this is something that definitely encourages foreigners to return to your country.

Of course, when talking about these positive aspects related to visiting North Macedonia, it must be remembered that the local tourism sector is actually just beginning to develop and it certainly requires significant investments.

Having said all this, I am also satisfied that I represent the country whose citizens most visited North Macedonia before the COVID-19 outbreak. We have now a direct flight connection to Skopje and Ohrid reestablished, and we hope to confirm our leading position in the tourism market in your country.

In your opinion, what is the most valuable moment that you experienced during your stay here and how did it affect you?

Another positive experience was the accession of North Macedonia to NATO – the first such clear confirmation of your country’s belonging to a family of democratic states, guided by the most important values ​​in international relations.

I would also like to mention the positive course of the visit of the President of the Republic of North Macedonia, Stevo Pendarovski to Poland in 2020. I was then a member of the Polish delegation – it is a great satisfaction for each ambassador if the heads of state discuss only further developing mutual cooperation, and not solving problems in bilateral relations.

However, there are also experiences of a different kind, less positive, because they are related to blocking North Macedonia’s membership negotiations with the European Union. Poland stays a definite ally of Skopje in this matter, and we hope that this situation will change soon.

Your Excellency, you are the representative of the Visegrad Group (V4), this year’s DMWC Diplomatic Charity concert “Listen to me with your heart/Слушни ме со твоето срце” honorary presidents’. How important is charity work for yourself?

EU countries traditionally support DMWC charity events organized annually. We did it also this year, and with the Polish presidency of the Visegrad Group, I had the pleasure of being the honorary president of your project. Charitable work is natural in any society. For obvious reasons, it is the most developed in wealthier countries. Over the last 30 years – after the fall of communism – the charity sector in Poland has developed a lot. The most dynamic organizations are now able to collect up to several tens of millions of Euro during one year.

It is important that states and governments do not limit this type of activity. Non-governmental organizations complement the social activities of governments, so they deserve maximum support, e.g. in the form of tax deductions for citizens. In Poland, we introduced such provisions that significantly increase the potential of NGOs many years ago.

And last, how do you see the mission and activities of Dobredojde Macedonia Welcome Centre, what future role can it aspire to have?

My almost three years of experience show that Dobredojde Macedonia Welcome Center pursues at least three important goals. The first is the promotion of North Macedonia among foreigners. This type of activity can take various forms: from promoting tourism through culture and monuments to familiarizing us with, for example, local cuisine.

The assistance provided in the adaptation of foreigners, including diplomats who spend several years or longer here, to function in a new cultural environment is certainly of great importance. For my part, I can say that after my first tour organized by DMWC in 2018, I still have contacts and even friendships that I have maintained to this day.

And finally, building bridges between Macedonian society and the outside world. North Macedonia is a small country that, in order to develop, must build the widest possible cooperation with foreign partners. It is about politics, business, culture, as well as contacts and cooperation, among others with foreign NGOs and local authorities. Our Polish experience shows that this type of activity is very important for the proper functioning of all democratic countries. Here too the DMWC can certainly play a very positive role.