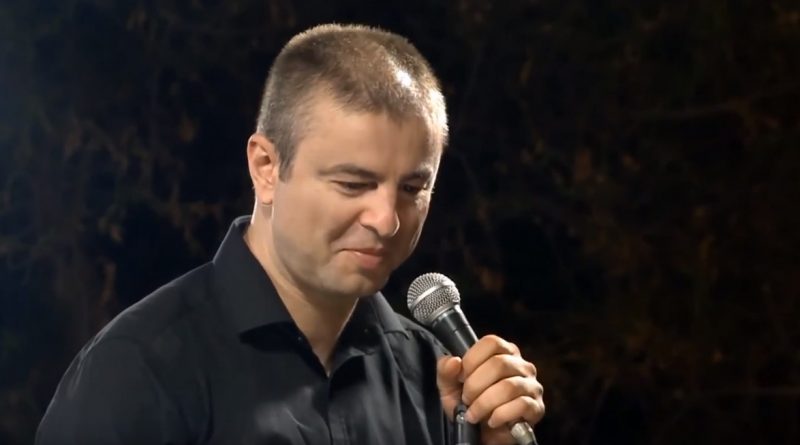 Nikola Madzirov (poet, essayist, translator) was born 1973 in Strumica, Macedonia, in a family of Balkan Wars refugees. His poetry has been translated into more than tweenty languages and published in collections
and anthologies both in Macedonia and abroad On Nikola Madzirov’s poetry.

“We are the remnants of another age”— writes Nikola Madzirov in one of his poems. These poems are like Expressionist paintings: filled with thick, energetic streaks that seem to emerge from the imagination and to return to it right away, like night animals caught in the headlights of a car. “We are the remnants of another age”—Nikola Madzirov succeeds in convincing us. Adam Zagajewski (Poland)

Nikola Madzirov writes some of the finest poetry to come out of Eastern Europe – very much his own person but a powerful continuer of the line back to Vasko Popa, Milosz, Herbert… Surreal, human and humane, taking in the darkness and always fresh, new. Peter Boyle (Australia)

Nikola Madzirov’s poems seem to spring from elsewhere in time, reflective of a preternaturally wise and attentive sensibility. As we read these poems, they begin to inhabit us, and we are the better for having opened ourselves to them. Madzirov is a rare soul and a true poet. Carolyn Forché (USA)

While we know that we’re in this world on ly for a short time, some people act as if the world belonged to them. Even writers are not free of such arrogance. Yet Nikola Madzirov chooses to approach reality with great humility. He almost makes himself in visible in order to let his poems glow. He knows all the desires of his generation and with draws himself: “Ancient is the wish for a touch on the forehead / when no one’s looking.” Michael Krüger (Germany)

There are times (now) when we long for exactly this kind of purity. Poetry doesn’t  develop, it starts over and over again. Why this sounds fragile, gentle and fresh is beyond our understanding. Nikola Madzirov

BEFORE WE WERE BORN
The streets were asphalted
before we were born and all
the constellations were already formed.
The leaves were rotting
on the edge of the pavement,
the silver was tarnishing
on the workers’ skin,
someone’s bones were growing through
the length of the sleep.
Europe was uniting
before we were born and
a woman hair was spreading
calmly over the surface
of the sea.

SHADOWS PASS US BY
We’ll meet one day,
like a paper boat and
a watermelon that’s been cooling in the river.
The anxiety of the world will
be with us. Our palms
will eclipse the sun and we’ll
approach each other holding lanterns.
One day, the wind won’t
change direction.
The birch will send away leaves
into our shoes on the doorstep.
The wolves will come after
our innocence.
The butterflies will leave
their dust on our cheeks.
An old woman will tell stories
about us in the waiting room every morning.
Even what I’m saying has
been said already: we’re waiting for the wind
like two flags on a border.
One day every shadow will pass us by.