Albanians in North Macedonia have many traditions, customs and holidays. The Day of the Albanian Flag and the Creation of the Albanian Alphabet are among the most celebrated in the public sphere. One of the biggest and the most important private celebrations is the wedding day. Although Albanians share many a custom with other Balkan people, few outside the ethnic Albanian community know much about the Albanian wedding. In this text
we would like to present the wedding customs, striking a balance between ethnologic facts and modern practices.
In the Albanian community, which alongside all the nations in the Balkans, is still a traditional society, wedding is responsible for creating the smallest social nucleus, that then would both bear new generations and also develop the friendship and the social ties between the two families. So, it is no wonder that the wedding ceremonies last for one whole week that is called jave nuses, which means “wedding week”. The whole neighbourhood is involved in the event. There used to be multiple parties, the bride’s one held on Wednesday or Saturday, while the groom’s celebration always held one day later. But in the modern condition, people being busier and more practical, there often is only one party on Sunday. Throughout the wedding week, food is prepared – chiefly chickpea-flour bread (buke me qiqra) – as relatives, friends and well-wishers visit both the groom and bride respective homes to congratulate them. The celebrations pick up on Thursday when the bride starts her make-up preparations. Some families schedule visits for the less important or the less knownguests and neighbours at this time. It is customary to leave some money at the tray or on the coffee table in lieu of wedding presents. All the sums of money are almost always carefully recorded and given to the bride and groom to start them in their new life. Friday is the day when the guests continue to visit for viewing the bride, wishing her good luck and congratulating her family. The bride is dressed in white and expected to greet each and every guest in the living room or in the women’s room. The men stay in a different room. Friday is also the night of the cocktail party or dinner for the closest social circle of the couple. It is more informal and the bride can wear white or other colours if she wishes. 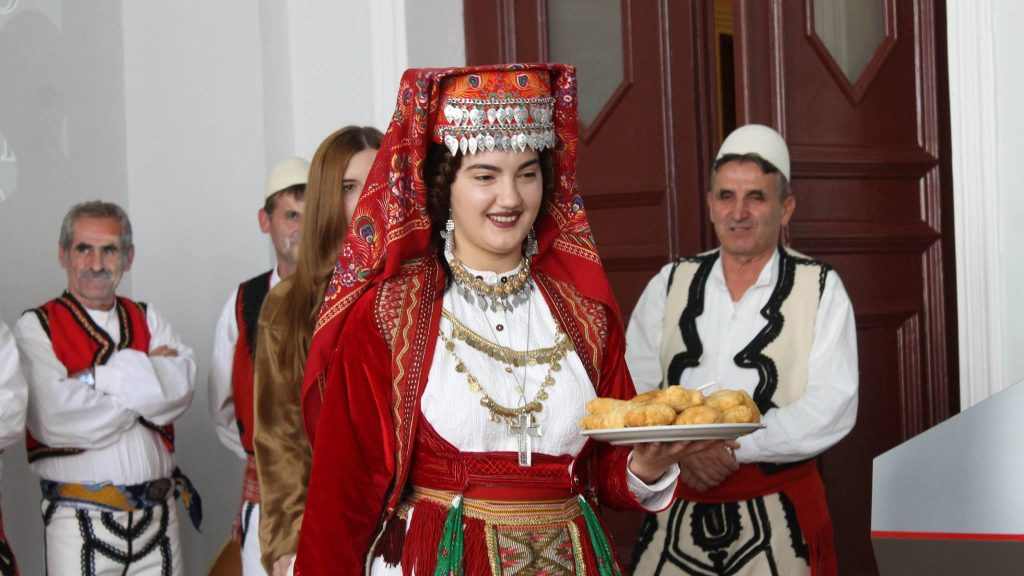 Rice, sugar, honey…
On the morning before the Wedding Night, the man in charge of the wedding orders the raising of the national flag in a visible place which symbolizes beginning of the wedding and is an invitation for everyone to celebrate the marriage. The head of the family, usually the groom’s father or a close relative, stays inside the oda, reception room, to welcome all the guests who come to offer their best wishes to the newlyweds. Sunday late morning or noon, the groom and his party come with a luxurious car to pick up the bride. Krushqit are a type of groom’s maids. They accompany the groom, singing and dancing. They travel to the bride in decorated cars. The main car is that of the new couple, and next to it comes the car that carries the Albanian Flag. A little kid, the youngest from the groom’s family, holds a bunch of flowers to be sent to the bride. After the groom and his relatives arrive at the bride’s home, they take her with them. This is a moving moment. Usually the bride and her family cry all together because the bride is leaving her father’s house to go to a new one. Rice and sugar is thrown when the bride leaves her father’s home. The cars have to circle half the city and cannot go back by the same route. When the bride arrives at the groom’s, home guns are fired to express the joy of this moment and a kind of victory. At the door of the house, there stands the mother-in-law singing and waiting for the bride to give her honey and bread to eat. This ritual expresses the wish that their relationship be sweet as honey. When the bride enters her new home, a little boy waits to take off her sandals in which he finds some money traditionally hidden there for him. After that, the same boy sits on the bride’s lap to bring her good luck in giving birth to male children. 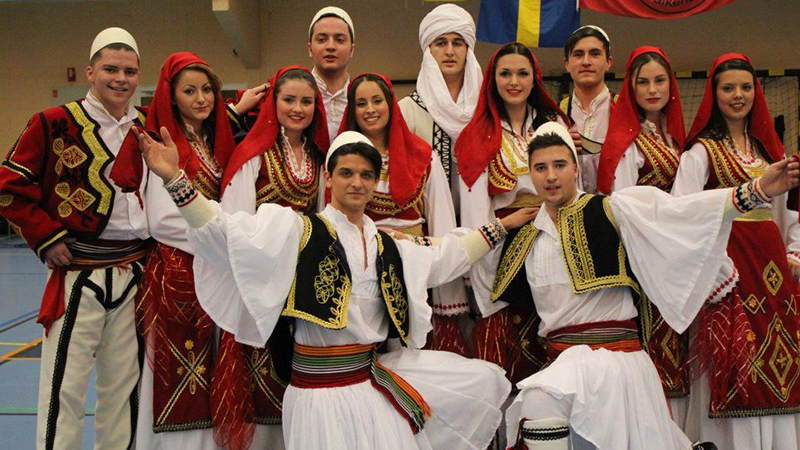 The importance of the dowry
As a rule the bride brings her dowry to the groom’s house. The dowry traditionally consists of handmade or embroidered items such as pillows, blankets, clothing or even furniture and whatever else the bride will need to start her life in the new home. This custom comes from earlier times when the dowry was all that the bride was allowed in her husband’s house and her wealth was displayed in golden coin necklaces and belts. The groom also gives presents and money to the bride’s family. The bride may also receive a selection of special gifts including clothing suitable for each season and expensive gold jewellery. Sunday night is the groom’s wedding dinner party to which the bride’s close relatives also come. The first toast belongs to the groom’s father this time with the bride’s father or oldest male relative speaking immediately after him. The bride’s party number is also odd, but they must be two more than the groom’s party of the previous night. Customarily a white “bachelor’s handkerchief” doused with alcohol is burned during the traditional “Napoleon Dance”. The kerchief should be aflame while the groom dances with it and it is not an auspicious sign if it stops burning midway. Sometimes people fire shots in the air to announce the wedding. Dinner is served after the guests have been chatting and singing for a few hours. Sofras or dining tables are assigned according to the importance of the people seated at them; the first sofra is reserved for the clergy, bajraktar, the uncle and other highly respected people, the second, third and other sofras are offered to the other guests according to the hierarchy. Veal with vegetables, cabbage broth with meat, pie, sour milk, cheese, pickled vegetables and salads, qyshkek (boiled sweet wheat) and sometimes halva and tamlorizi (rice with milk) are served for dinner and dessert. 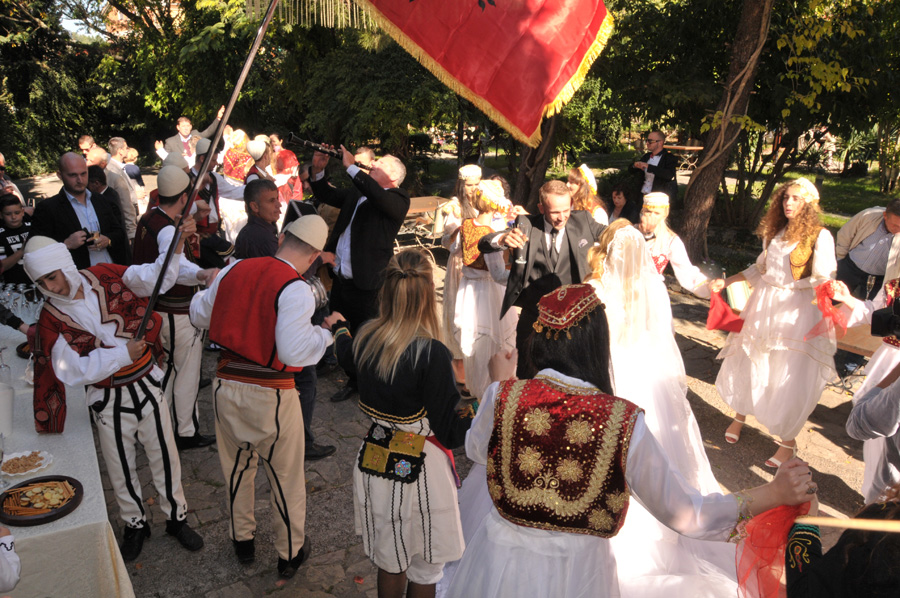 Singing and conversations would continue after dinner. The band duty is to maintain the wedding guests high spirits. The repertoire of songs is very diverse, ranging from historic songs to elegies and lyric songs, to suit the taste and meet the requests of guests of every age. Historically, the most favourite songs were those accompanied by lute and epic songs about bravery. Shots would be fired at the end of the songs or even during them, as a sign of admiration for the characters in the songs, their deeds, or because of memories of youth. Typically, the young couple goes to honeymoon immediately after the party. If one has missed visiting the couple during the wedding week, or had not received an invitation, he or she can still visit them during the following month and leave some money on the table or tray as a wedding gift. If the couple has moved into a new place, one ought to bring a housewarming gift as well. Ethnological studies reveal many other wedding rituals and customs which are no longer practiced. One archaic form of engagement is betrothal of unborn children or, as a variant, of infants from families connected with a very strong friendship. Such an engagement was considered binding and if broken was avenged with blood. Another engagement procedure with its own elaborate rules was betrothal through a matchmaker. As soon as the right bride is picked up for a groom, the matchmaker would visit both families several times trying to negotiate all the matters around the eventual wedding. The most important mission of the matchmaker was to persuade both sides that the families are of the equal social status and can therefore be connected through the wedding of their children. This tradition is also known for a ceremony of giving the word, or the promise, fjala, at which the time of the wedding was
agreed. Giving the word ceremony often turned into a scaled down wedding celebration.