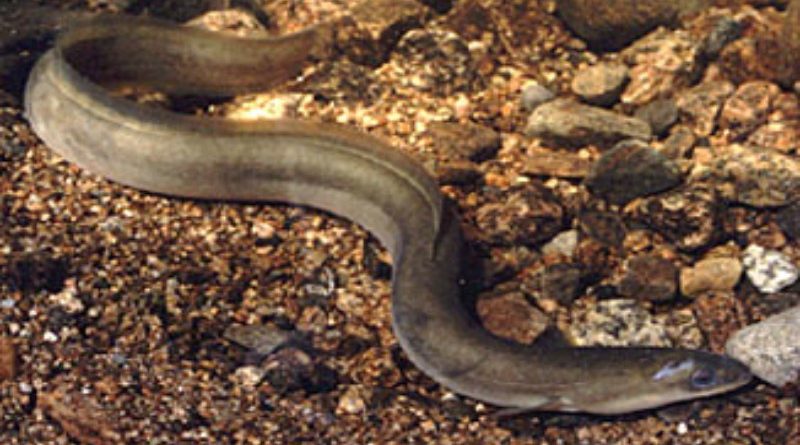 The 170 meter long wooden sculpture of the Ohrid Eel, placed near the shore of the city harbor up to the closest beach, is the latest attraction in Ohrid. The artist Sergej Cingulovski has already applied for the Guinness book of world records with his piece.

This artwork is inspired by the rare species and phenomenon emerging in the Ohrid Lake – the presence of the fish eel and its journey. This journey starts in the Ohrid Lake and it continues along the river Drim up to the Sargasso Sea for nesting the eggs, as well as the trip back of the young fish all across the Atlantic Ocean and Mediterranean Sea through the river back to the Ohrid Lake.

The presence of the Eel is very significant for the region; this is why it is regarded that the old name of the town of Struga was Enhalon (Eels place). The town of Struga lies precisely on the spot where the lake flows out into the river Drim. In ancient times, it was in this spot that the traps for catching the eels were made and in more recent  times those traps are known as “daljans”. It is believed that the ancient tribe of the Enheleians lived through the entire flow of the river Drim.

The eels, regarded to be a species as old as the dinosaurs, are a living example of the process of metamorphosis. The strange phenomenon of physical transformation of the eel has always caused authors to obsess over it and to produce masterpieces inspired by it, such as the Latin poet Ovid or the famous Franz Kafka.

Eels’ bodies are in a constant cyclical change. But to tell their story in more understandable way, we must start from the second half of their life. That is also the way we get to know the fish, since the eel has intrigued even the greatest thinkers of our time. Whilst adult eels were abundant in numbers along coasts and in freshwater waterways, no one could find the fish in juvenile form nor did they know where the eels spawned. In the 4th century BC, Aristotle recorded the first observations of the life of an eel. He believed that eels were created spontaneously from the mud of river beds. Pliny the Elder – an ancient natural philosopher – thought that young eels grew from skin that adult eels had rubbed off against rocks. Whilst both theories seem entirely unbelievable, no one could prove them false until Johannes Schmidt found the eel’s spawning grounds in the Sargasso Sea in 1922.

So, the eel may live in bays, rivers, and streams for twenty years or more. But when the time comes to spawn (lay eggs), they undergo a physical transformation, the final metamorphosis being when the yellow eels become silver eels. Silver eels are longer, thicker and take on a metallic black-bronze sheen with a pure white belly. Just prior to their migration, the eel stops feeding and its eyes and pectoral fins enlarge, while their digestive system survives atrophy. Silver eels swim towards the salty grounds during the winter months in order to reach the Sargasso Sea’s warm waters for their January spawning. They will overcome seemingly impassable obstacles to get where they want to go, even if it means leaving the water to travel on land for a short distance, swimming through rapids or up dams. It can take elvers years to reach their destination. People along the river Drim tell of the spectacular scene of thick round groups of eels, which, when travelling, are always taking the right side of the river.

Once in the Sargasso Sea the eels complete their life cycle by spawning and then dying.

For centuries, the location where eels were born was a mystery. Even today, no one has ever seen eels spawning in the Sargasso Sea. As matter of fact, no adult eels or eggs have been found there. So how do we know this is where eels are born? Scientists have used nets with very fine mesh to capture young eels all over the Atlantic Ocean. The very smallest ones—eels that have just hatched—are caught in the Sargasso Sea.

The young larvae, called leptocephalus, cross the Atlantic Ocean on the ocean currents. The larvae are transparent, leaf-shaped and appear nothing like an adult eel. For about a year the leptocephalus drifts along with the Gulf Stream before entering coastal waters. Prior to entering these waters, the eel will make its first transformation into a more eel-like shape, though still transparent, and it is called glass eel. As it makes its way into estuaries, the glass eels become longer and pigmented – taking on a brown or gray color when they become elvers. Near the European and North African coasts, they metamorphose into elvers (young yellow eels). These individuals then settle in coastal zones or in estuaries, or swim up rivers. When coming back, the young fish, unlike their parents, always swim on the left side of the river. People say not to interrupt the reverse journey of their counterpart fellows.

When it completes its journey, the elver will complete another transformation into a longer, more yellowish creature known as the yellow eel. The yellow eel is evasive and nocturnal, preying on aquatic invertebrates, amphibians and fish.

During the yellow eel stage, the animal will recognizably become a male or female. Usually females are found in freshwater habitats while males are found along the coastal areas. Females will return towards the males once they have sexually matured – which can take as long as twenty years. And that is actually the beginning of their journey.

Nowadays, the eel is placed among the endangered species, whose numbers have significantly dropped over the last two decades for unknown reasons. Over-fishing, pollution, river development, global climate changes, etc., are regarded as the biggest threats to the survival of this migratory fish.

The Ohrid eel is also endangered by overfishing, especially from unregistered fishermen, but also with the erection of two huge hydropower plants on the river Drim. These power plants block the natural passage of the eels. Many eels meet their death under the power plant turbines or cannot overcome the concrete obstacle. There are many actions being taken by the authorities to overcome this problem such as artificial breeding, harvest limitations, projects to remove the man-made dams interrupting the historic eel migration routes, as well as building eel ladders at hydropower plants, however, this ecological problem has not been solved.