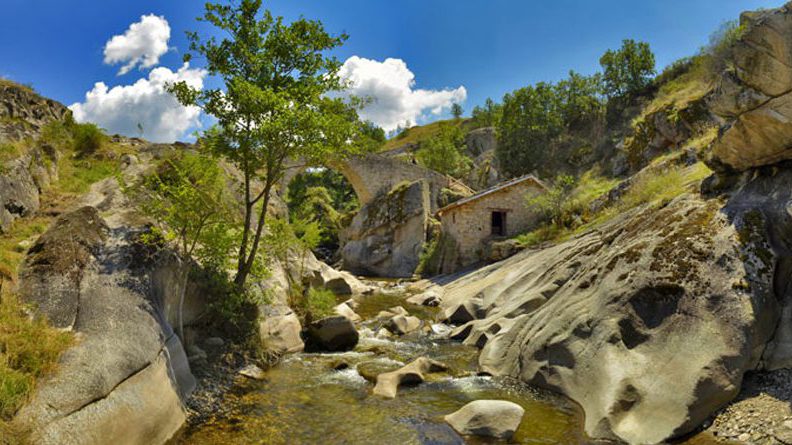 By Ferid Muhic, Professor by Philosophy

Every truth is comprised of much more than the facts!  That’s a lesson you will quickly learn in primeval Macedonia. This life wisdom is very easy and clearly understood in Mariovo! Therefore, since you already are in Macedonia, devote one day of your life to see Mariovo. Your stake is big – life is composed of that happening to us during a day! – On the top of that, you can’t ever get back a day of your life, just because you aren’t satisfied with what you got!

Don’t you worry: Mariovo, with its exclusive views, will pay you back!  It will introduce you to such an intensive contemplation, so rare and worthy, that you will not, even for a moment, think to complain to the concierge at the hotel, called your life!

Take a ride, (with the first dew) from Skopje to Prilep. As you ascend towards Pletvar, look at the tall mountain wall on your left. That’s the north edge of the star’s crater in which Mariovo meditates for thousand years: from the sign Belovodica, on your left towards southeast, the passage- Ligurisa, which is one of the three accesses to the Mariovo volcano. 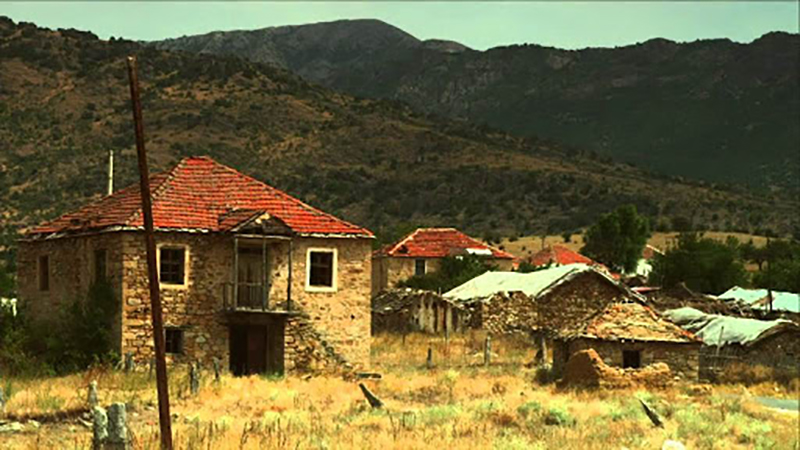 From Pletvar(990 m.), like a shell taken out of the Pelagonia plain: Prilep alone and distant. You will stay breathless when you see, in the middle of the town, the spectacular Markovi Kuli(Marco’s Fortress) the fortification of  the Slavic greatest epic hero, Krale Marko(Kraljevich Marko/ Prince Marco) built on the top of the, hundreds meters tall, megalith rock of dark basalt and red granite. The rocks “Slonot” (“The Elephant”-well noted by Robert Ripley in his column of world’s wonders “Believe it or not”), “Zhabata” (“The Frog”), “Baba” (“Grandmother”), are natural formations, not found anywhere in the world. The massive “Zlatovo”(1,422m) will remind you that the “Sugar Head “ located  in Rio de Janeiro, is just its’ small copy. It’s a sin if you don’t have a bite of the famous Prilep’s “kebapchinia”. At the sign Lagovo leave the main road going to Bitola, and turn south-west. Already you are trembling! Everywhere infinitely Pelagonia, deserted with no riders. In front of you the external wall of the Mariovo crater. On your right, just below the road, the village Shtavitsa,( from the famous Macedonian  movie, by Milcho Manchevski,“Before the Rain”) ; in front of you the emerald green hills embraced at the passage “Sliva”( “Plum”,  1,120m.) Rinse well your face with the cold and, for the eyes, curing water from the fountain. Take a deep breath. You are entering Mariovo, the vast volcanic crater (1,000m2)! Unbelievable, on you right, perfect sculpture of girl’s breast with the nipple. The peak “Visoka” (“Tall”1,471m.), the nipple are the remains of the wall from an ancient Payon’s fortress. At the visible bottom of the grand calmed crater, send out, all the villages so well known from the Macedonian folk songs. The birthplace of Itar Peyo(Wise Peter), the Macedonian twin brother of Nasredin Hodza, the main character of hundreds Macedonian popular tales. On your right a wood of wild pear trees, grafted, for the last 43 years, by a single pair of able hands and noble soul. In cosmic silence you will pass by the pears, meadows and huge megalith, reaching the Rasimbeg’s Bridge. 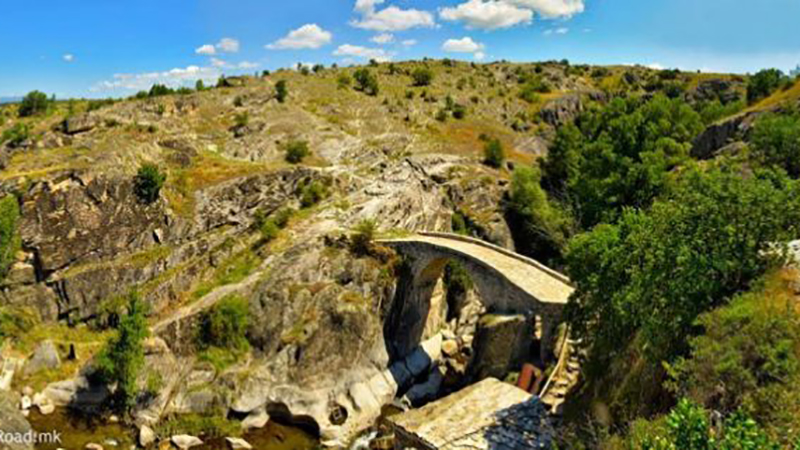 Here is the river. The river Crna (Black)! This river being the epitome of the first verse of Solomon’s “Song of the songs” – Nigra, sed Formosa! I am black, but comely, O ye daughters of Jerusalem. Stop there, because of Crna and, because of the house of   Blagoja Risteski – Platnar, the greatest poet of Crna, which he sung in the superb film triptych.

Further away, you will see Micko’s flock of ships. He will offer you the best Mariovo’s cheese, and you will hear truths that only Mariovo knows. Don’t leave the pure onyx rocks, shining in the grass by the road, untouched by your hand palms. On your right the road will lead you to the village Manastir. According to the legend, here was the mythical Aristopolis. On the main road, at you left, you will find the St. Elias monastery, the inn and the shadows of three imposing oak trees. Before Vitolishte, ask, or just walk for 10 minutes, to your right, into the woods. You will be absolutely impressed by the biggest oak of Macedonia, at least 800 years old. After Vitolishte, if you are riding an SUV, drive on, if you are on feet, keep walking, definitely towards Zhivoino. At Vrpsko, in the summer, you will taste the most delicious black mulberry in the world, the most erotic fruit you have ever seen. Descending, towards the bottom of the crater, takes long. At this point Crna is warm and quiet. Over half a million soldiers during the World War I, for months, stayed at this tiny space. The remains of the old military road, by the Blue Puddle and the Cold Water, will take you to the inflow of the Tikvesh Lake. The lonely fisherman will offer you the fish, the taste of which will make you wish God forgives, to you and the fisherman, ninety nine out of every hundred sins you made. From Kaimakchallan on the south part of the Crater, with the chapel, the memorial charnel house of the fallen soldiers forcing the Solun Front in 1918, and the urn of ashes from the heart of Dr.Rice, located on the peak (2,520m.a.s.l.), until the dark shadows of the backbone of the Selechka Mountain, on the north horizon, all the stars of the hemisphere gradually gather covering the sky. After a while the sky becomes too narrow and the stars begin to fill- in the crater Mariovo, from where one cannot hear, but one can feel the perfectly silent breathing of that unforgettable Crna( Black), though comely, O ye daughters of Jerusalem.

Those are the facts. The truth you will know, when you go.