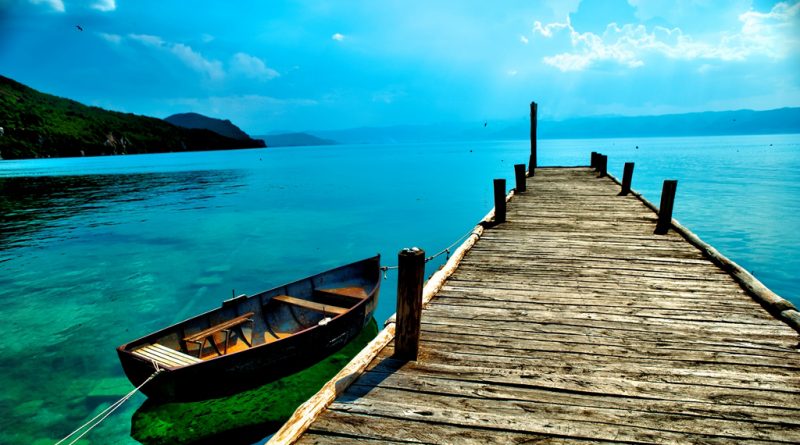 As a UNESCO protected cultural and natural site, Lake Ohrid has a lot to offer tourists. It has a unique city architecture, breath taking views, tiny but marvellous beaches, the splen did river Drim and its calm, bucolic springs. The surviving 40 churches in the town and its vicinity, among which are the ancient monasteries of St Naum and St. Clement, as well as the Cathedral Church of St. Sophia and the small church of St. John in the fishermen village of Kaneo. The legend says that Ohrid had 365 churches– one devoted to each day in the year. 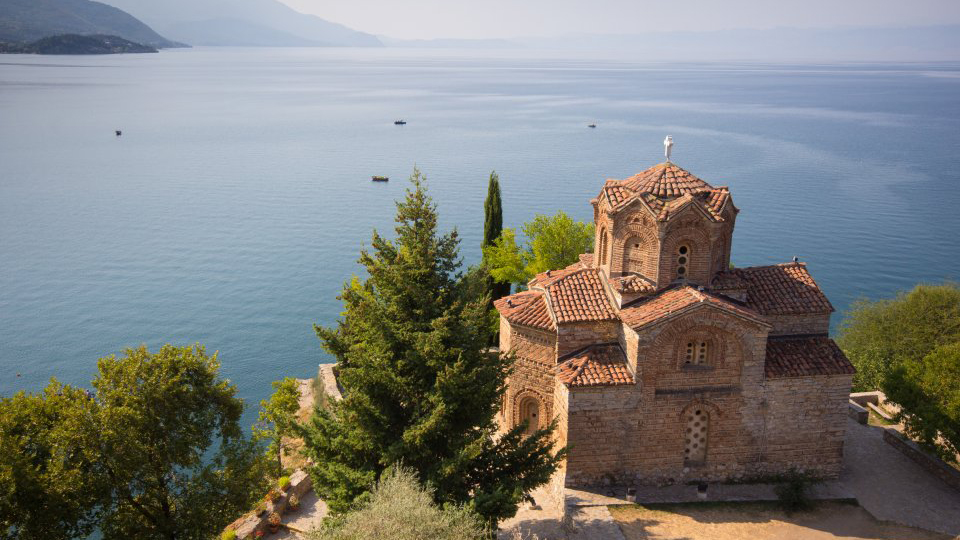 However, what can be regarded as touristic discovery, a unique highlight in a travelogue is a church situated on the south-eastern side of the lake some 20 km from Ohrid, near the village of Trpejca.It is a touristgem for at least three reasons. The first one is its location. It is actually not accessible by foot, but can only be reached by boat. The second feature setting this small church apart from others is a very rare fresco of breastfeeding Holy Mother. And the third fabulous momentum connected with the place is that it is such a magnificent swimming spot. 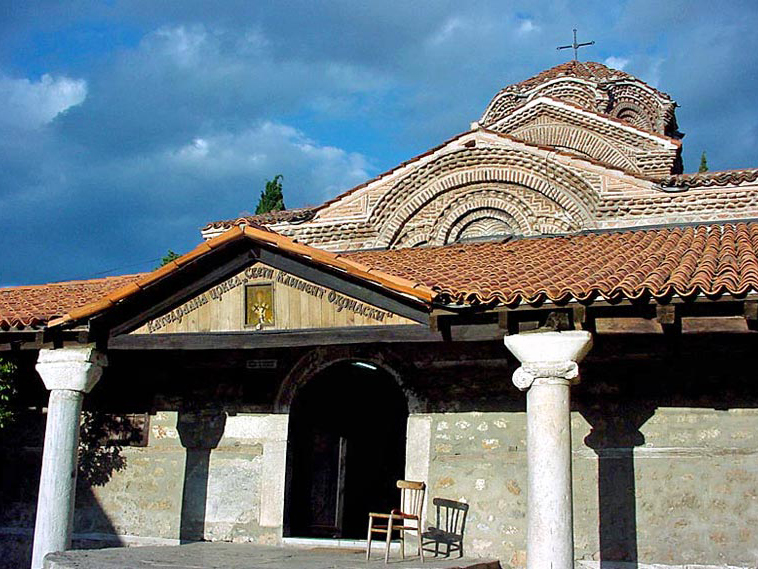 The church has a few interesting dualities. It is devoted to the Holy Mother of God, but it is also called Zahumska (Saint Zaum for short). The legend tells us of the king’s daughter who was visiting the St. Naum Monasteryfrom Ohrid and was caught there by bad weather. Despite high waves on the lake and contrary to the advice she received, she ordered departure for home. The journey was a narrow escape, and she founded this church to commemorate her misadventure and to express her gratitude for deliverance from peril. The church was also a commandment to “think better next time”, and this expression, “za um” gave the church its popular name. 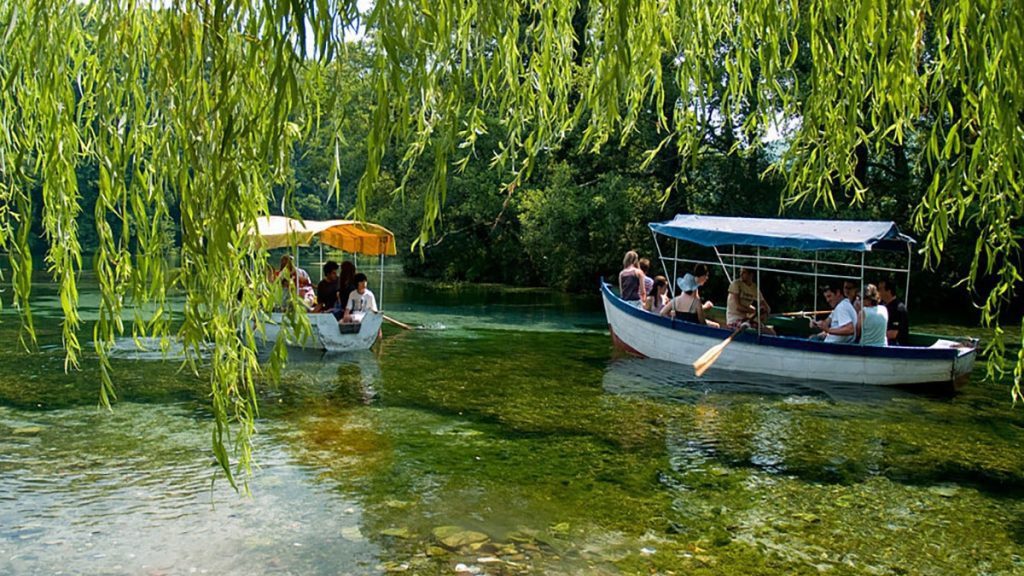 An inscription above the entrance reveals the dates of construction and of the frescoes. It says it was built in 1299 while the frescoes were painted in 1361. But, often the year 1361 is considered to be the year of its foundation. The church represents a memorial to the founder,Grgur, who was a brother of the famous medieval ruler Vuk Brankovic. Another Grigorie (Grgur is also a variant of Grigorie) the bishop of Devol, is mentioned as a donor. The Zaum Church, although small, inaccessible and remote, has prime class heritage treasures.

Like the churches of St. Bogorodica Perivlepta (St. Clement) and St. John the Theologian – Kaneo, it is in the shape of a cruciform with a dome surmounting the central part. Blind arches divide its threesided apse. The church in its original shape also had a parvis, an enclosed forecourt. The frescoes have sustained considerable damage. In 1898 the Zaum monastery was demolished, and later reconstructed.
Life size portraits of saints dominate the first zone. Amongst them are the portraits of the hermits St. Clement and St. Naum, Christ and the Holy Mother. The second zone is filled with scenes of the life of the Holy Mother. The highlight of the series is the innovative nature of depicting the interior in the scene of the Nativity of Mary. There are also portraits of SaintsPeter and Paul, as well as of Saints George
and Dimitry dressed in aristocratic robes. The portrait of Naum of Ohridstands out among the frescoes: despite visible damage, the preserved parts show the remarkable talent of the unknown artist, especially his expressiveness,spontaneity of compositions and a rich palette of lively light colours. Based on these features, art historians distinguish the fresco master of this church from his contemporaries
who worked in Ohrid. It is assumed that the artist gained his painting education in Thessaloniki. The fresco on the eastern wall of the former parvisdepicts Jesus Christ and the Holy Mother dressed in royal garments. 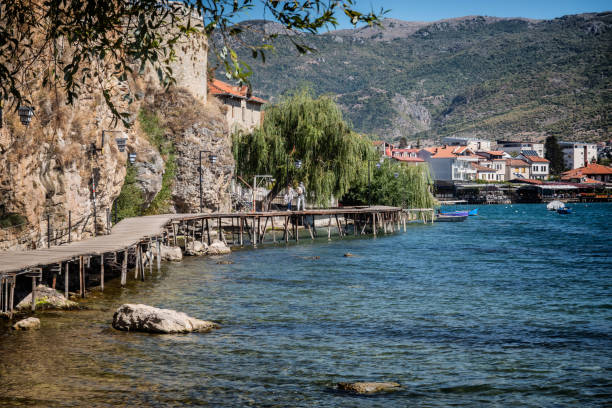 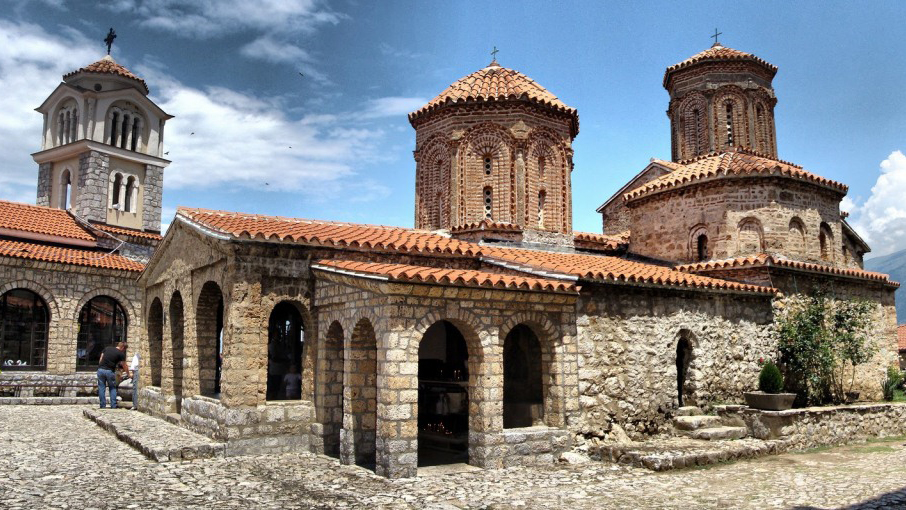