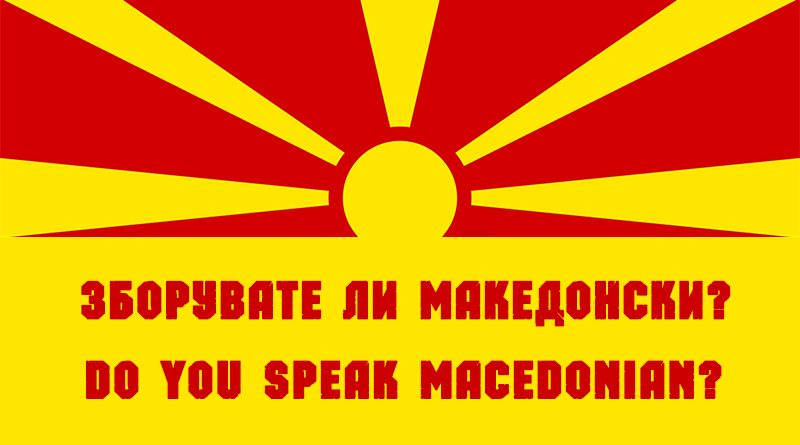 Language is one of the most important features of a nation. As for the Macedonian nation and its state, language is of an extreme significance as it offers a confirmation of our nation’s historical continuity. Apart from being the official language in the Republic of Macedonia, Macedonian is spoken and cherished by Macedonian communities in many European countries, the United States, Canada and Australia. It is also the mother tongue and a language of everyday communication of ethnic Macedonians in other Balkan states.

Macedonian is an Indo-European language from the Slavic language family belonging to the Southern Slavic group.  While it shares certain features with the other Slavic languages and non-Slavic Balkan languages, it is a distinct language. Members of the Southern Slavic group form a continuum of mutually intelligible languages. The two end points, Slovene and Bulgarian, are not mutually intelligible, but the transition between neighbouring members, such as Serbian and Macedonian, and Bulgarian and Macedonian is gradual and mutual intelligibility is high.

At the same time, Macedonian is a Balkan language. Today it occupies a central position on the Balkan Peninsula. It has common borders with Albanian, Greek and Turkish spoken in Thrace, which makes possible the inclusion of a large number of Balkan characteristics into the Macedonian language. Located in the Slavic linguistic periphery within the boundaries of the Greek-Byzantine civilization and Roman-Balkan culture, Macedonian preserves numerous archaic features, such as the use of imperfect and aorist, but has also made a number of innovations.

Although Macedonian is fairly homogeneous, several dialect areas can be distinguished. There is a major division into eastern and western dialects and a subsidiary division into Northern and Southern dialects which cuts across the major east-west divide. The dialect of the capital, Skopje, is located within the northern area. The western area consists of a large central area, and a peripheral one, the latter located along the Albanian and southwestern Serbian borders. The east comprises a relatively linguistically homogenous area which includes the Macedonian dialects of Bulgaria (Pirin Macedonian) and those of northern Greece (Aegean Macedonian). The dialects of the western central area, the largest in size and population and most distinct from both Serbian/Croatian and Bulgarian, with elements from the dialect of Skopje, are the basis of the literary standard.  A characteristic feature of the Macedonian literary standard is the three-syllable accent -the accent always falls on the third syllable from the end in words of three syllables or more – and clear pronunciation of unaccented vowels.

As the official language of the Republic of Macedonia, Macedonian is written using its Cyrillic alphabet. The phonetic principle has been applied in contemporary Macedonian orthography, which means that there is a separate letter for each sound, so that the language has 31 sounds and the alphabet has 31letters. The Macedonian language was proclaimed the official language of the Republic of Macedonia at the First Session of the Assembly for the National Liberation of Macedonia, held on August 2, 1944. The first document written in the standard Macedonian language is the first issue of the Nova Makedonija newspaper in October 1944. In the following years the standard literary language was swiftly and comprehensively developed and affirmed within the country and abroad.

The Macedonian language has a rich history and has played a key role in the preservation of the distinctive national identity of Macedonians as well as in the development of our spiritual culture and creativity. An abundant literature has been written in Macedonian in all fields, while in the field of linguistics, a comprehensive Dictionary of the Macedonian Language and many bilingual dictionaries have been prepared. A large number of works, from classical to contemporary literature of many languages, have been translated into Macedonian.