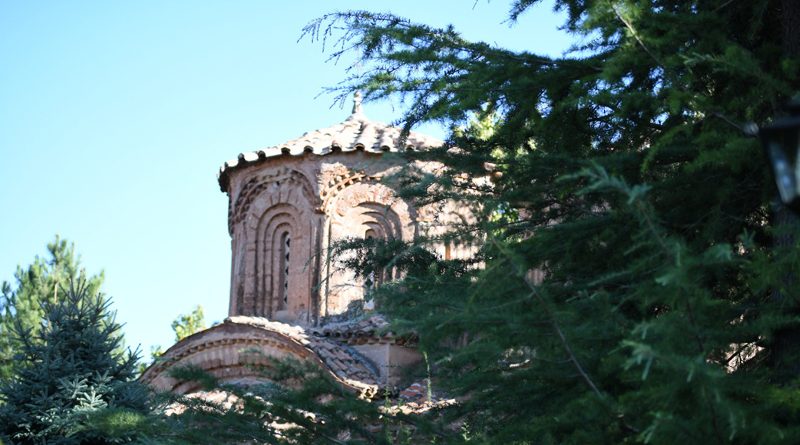 According to the rich source of documentation in Mount Athos monastery – Iviron, the church “Presentation of the Virgin Mary the Merciful (Eleusa) ” occupies an important place in cultural history of south-eastern Macedonia.

The preserved records of both architraves taken by the Bulgarian authorities during World War I, today in Archaeological Museum in Sofia, say that the church was built by the monk and later bishop Manuel in 1080. He came from the Monastery of St. Auxentius, which is located in Asia Minor, the Bithynia district. The monastery is mentioned in some church records by the Byzantine Emperor Alexius I Comnenus in 1085. In 1091 or 1094 he personally visited the monastery and its admiration was captured in written records. Church “Presentation of the Virgin Mary the Merciful (Eleusa)” is mentioned in the monastery typic composed of founder Manuel between 1085 and 1100.

Testimonies exist in several documents of the Byzantine emperor Manuel I Comnenus from 1152 in both charters of the Serbian Tsar Stefan Dusan of 1346, passed the monastery Iviron.

This Monastery presents the highlight of Byzantine architecture and sacred art of Macedonian territory in the Middle Ages.  According to its architectural design, the church is the only such facility of the 11th century in Macedonia. The monastery belongs to the so-called narrowed type churches.

Over the three basic parts of the church – the nave, narthex and south chapel “St. Spas”, are soaring and differently dimensioned domes with polygonal form, ennobled with tile-decoration of facades. The fresco decoration is performed on the south facade. In its upper central part is placed low and richly profiled rosette with a gear wreath and a lavish braid ornament in the shape of a cross.

Artistic expressions are realized in the fresco technique, mosaic and sculpture in low relief on the marble parts of the iconostasis.

The painting of the church is done in three different time periods: the altar, the nave, under dome space, walls, apses and the chapel in 1085; the porch in 1164, and the nave in the 19th century, with visible local painterly influences.

Fresco in the church ensemble is with symbolic iconographic content and images taken from the Old and New Testament: liturgical worship of the holy hierarchs with Hetimazis (Christ’s sacrifice) and Mary with Jesus Christ sitting on a throne in the sanctuary. In the central dome Jesus Christ Pantokrator is depicted, while underneath the walls of the drum are representations of the Virgin Mary Shirshaya, St. John the Baptist, two archangels and four prophets (Ezekiel, Habakkuk, Jeremiah and David). In the northern apse there is a fresco with the Descent of Christ into Hell and in the southern, there is the Meeting of Lord. Jesus Christ Emanuel is represented in the dome area of the southern Chapel “St. Save”. On the east wall there is a fresco with Jesus Christ in glory, and on the west – the portraits of St.  Nifon and St. Panteleimon.

On the south facade under a porch there is a composition dedicated to St. Onuphrius in the desert who is visited by the monk St. Panfnutius. In terms of style, artistic expression and motivation, this scene is close to the style of frescoes painted in Nerezi in 1164.

In the nave of the church an altar partition made of marble is preserved, with stylized floral and geometric motifs in low relief. The mosaic floor contains geometric motifs that follow the basics of apses in the central part of the nave, narthex and south chapel.