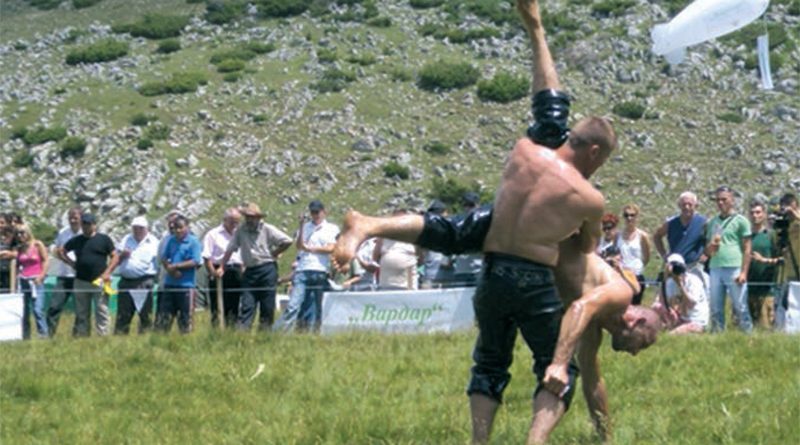 Pehlivan fighting or güreş is one of the strongest traditions in rural areas throughout Macedonia. Yet, among the urban population and the general public this exotic sport is rarely known. The fights of two half naked men dressed only in strange black leather trousers can only attract the attention of local media correspondents. But these fights are an obligatory part of each major rural celebration and festival in the villages like Kosturino and Calakli in Valandovo-Strumica region, and Kolicani and Saraj near Skopje, as well as in some villages in the Reka and Galicnik regions
in western Macedonia. Local stadiums, green hillsides and meadows and village playgrounds serve as the fighting arenas for the pehlivans under a close watch of villagers and their guests including those working abroad coming to their native places for the holidays.

The sport is known globally as oil wrestling while pehlivan fights and güreş are the popular names in the Balkans. A wrestler’s body is oiled with a mixture of olive oil and water. The wrestler or pehlivan (from the Persian pehlevān that means “hero” or “champion”) wears special leather trousers called kisbet made of water buffalo hide or calfskin.

Apart from the obvious physical strength that these fighters possess, the connoisseurs emphasize the mental and spiritual aspects of the fight. In the Ottoman Empire the wrestlers learned the art in special schools called tekke which were more spiritual than athletic centres. The aspiring pehlivan wrestler has to be a respected person in his community. He has to prove himself as an honest and modest man with proven moral values. He also has to have spent a certain time as a student and helper, the so-called cirak, in the home of one of the great masters of pehlivan fighting in the region. Only after having passed this test the candidate earns the right to become a pehlivan. The ritual of applying the oil relativizes the knowledge of techniques, strategy and physical strength. Before the fight starts, wrestlers oil one another demonstrating their calm and mutual respect. If a man defeats an older opponent, he kisses the latter’s hand as a sign of respect. Weight is not the only factor in matching the wrestlers. Judges decide to which category a wrester belongs according to his size, age and track record. The referees very well know the technique and level of mastery of each wrestler. The categories are subdivided into 13 groups. A wrestler weighing 120 kg might not be allowed to wrestle in the superior baş (head) category if he is too young or found lacking in technique. 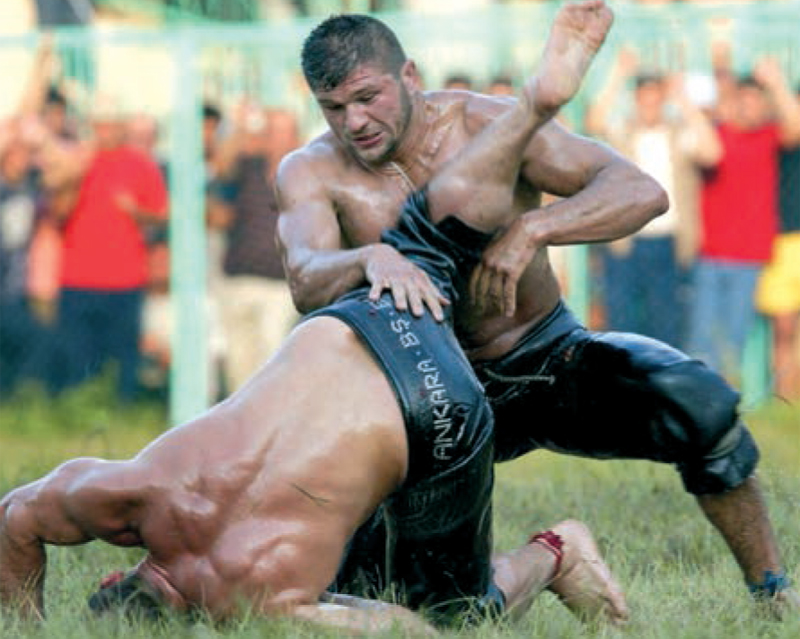 WRESTLING MARATHON
Wrestling partners are decided by drawing lots in the same group. Cazgir, the master of ceremonies, introduces the pehlivans to the audience, reciting in verse their names, titles and the wrestling
skills. The Cazgir, also traditionally called Aga, has an extremely important role of the moderator of the event. He is dressed up in the finest clothes of the Ottoman era. He praises and encourages
the wrestlers giving them moral support. When the Cazgir calls for the event to begin, the wrestlers perform the pesrev which is akin to a ritual dance accompanied by the magnificent sound of
drums and pipes. A special prize is given to the wrestler who performs the most solemn dance. This is an utmost honour. The wrestlers performing pesrev move in opposing directions raising alternate hands high overhead. Suddenly they crouch to momentarily touch the grass, then turn around slowly, and approach each other again. When they pass each other their bodies brush lightly. With each approach the body parts which come in contact change: shoulders, stomachs, hips, heels… Each contact is a provocation triggering a response from the opponent. The wrestlers also squat and pray to God and praise and embrace each other. After a few rounds of passing and light contact, the opponents finally engage each other and the fight starts.

Oil wrestling matches may be won by achieving an effective hold on the opponent’s kisbet. A win through this strategy is called paça kazık. A wide range of skills and tactics are deployed to overcome the slippery oil and to catch hold of the opponent’s body. The match is also won, if an opponent’s back is forced to the ground or if the opponent is lifted off the ground to a certain height. Originally, matches had no set duration and could go on for one or two days until one man was able to establish his superiority, but in 1975 the duration was capped at 40 minutes for the superior category of baspehlivan and 30 minutes for the rest. If there is no winner, the fight continues for another 15 minutes for baspehlivan wrestlers and 10 minutes for the rest, during which the score is kept to determine the victor. The winner in the top category gets the title of Baş Pehlivan, meaning the Chief Wrestler. Tapan drum and zurla pipe performance is one of the important elements of the traditional wrestling. It follows the fight and gives courage to wrestlers. Musicians vary delicate nuances of their performance according to the conductor’s instructions, while keeping their eyes on the game. The variations are subtle and go beyond the change of tempo with the pace of the fight. Music is the pulse of the fight capturing its complex physical and psychological aspects. It captures the beat of the wrestler’s hearts, throbbing of their blood, tensing of their muscles and the labours of their wills. It is an exacting task to translate those into melody.

EPIC TRADITION
The centre of pehlivan is the Turkish city of Edirne, a former capital of the Ottoman Empire. The traditional tournaments held there since 1362 were noted in the Guinness Book of Records as the world’s oldest continuously held sporting event.

According to a legend, soldiers of the Ottoman Empire organized a tournament as a way to while away the time and entertain themselves. Two of the strongest fighters met in the final round
which started at noon. When night fell the fight continued while the other soldiers went to sleep. When they got up the next morning, they found the two finalists dead lying next to each other having fought to the last breath. The soldiers buried them underneath a nearby fig tree. To commemorate the heroism of these warriors a wrestling tournament was staged annually at this site, and thus the world’s oldest continuously running sporting competition began.

But according to historians, oil wrestling tournaments go back to ancient Persia, to the period starting from 1065 BC. The legendary pehlivan of this era is Rostam who had repeatedly saved his country from evil forces. The word “pehlivan” was first used for a wrestler in the period when the Parthians (238 BC – 224 AD) expelled the Greeks from Iran. It is to this period that we can trace the basic wrestling rules.

In Ottoman Empire wrestling had a very broad appeal. Contests took place in palaces and private salons as well as in fairgrounds, at weddings as well as during charity collections.

Today the sport is spread all over Asia, including Iran, and in the former territories of the Ottoman Empire, such as Macedonia, Albania, Bulgaria and Cyprus. It is also gaining following in the countries which haven’t got a long tradition of oil wrestling. One of the most important new tournaments is held in Amsterdam, the Netherlands. Since 1999 doping control has become part of this sport. There is an initiative from several nations to include pehlivan fighting into the Olympic family of sports. This request is founded on the claim that free-style wrestling is already a member of that family, and pehlivan is a precursor of that sport. Time will show if this request is granted, but this sport, for sure, already has its fans all over the world.