Konstantin Miladinov is considered to be the founder of Macedonian artistic poetry, because his verses have both historical and artistic value.

Konstantin Miladinov was born in Struga in 1830. He graduated in literature at the Athens University and he also studied Slavic philology in Moscow. While in Russia, he helped his older brothers Dimitar and Naum in editing the materials for the  “Zbornik na Narodni Umotvorenija – The Collection of Folk Songs, Riddles and Costumes” that have been collected by Dimitar and Naum during their field work in Macedonia. The collection was subsequently published in Croatia with the support of the Croatian bishop Josip Juraj Shtrosmaer who was one of the patrons of Slavonic literature at that time.

Because of the cold Moscow climate, after spending a few years there, Konsantin Miladinov left Russia. On his return from Moscow, soon after arriving in Belgrade, he found out that his brother Dimitar had been imprisoned in Istanbul (Carigrad). He immediately went there, but he was met with the same fate as his brother. Even though Shtrosmaer did everything in his power to help them, they both died in the Istanbul prison, first Konstantin and then two days later his brother Dimitar Miladinov. 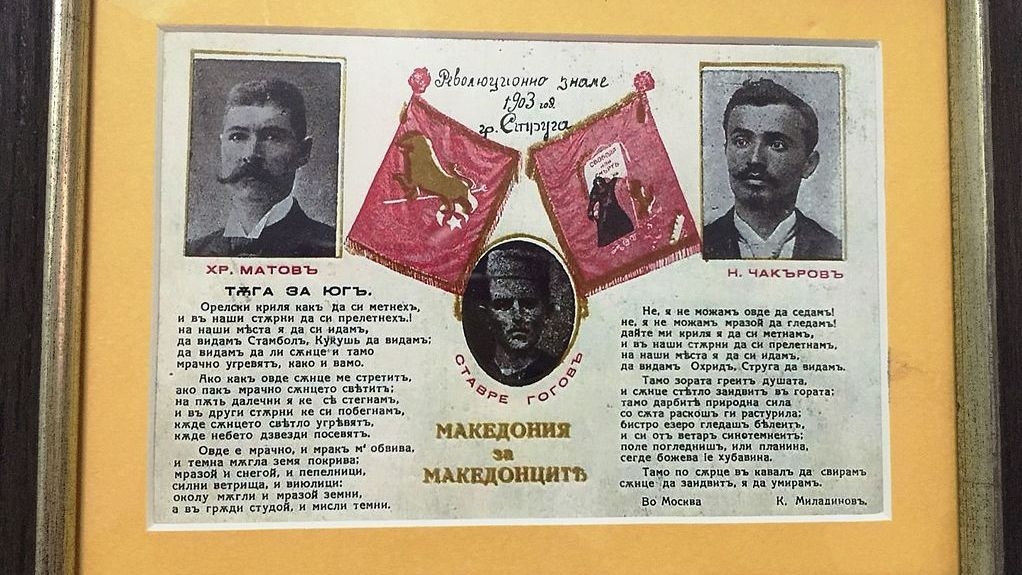 He wrote only 15 songs; among those are “Bisera”, “T’ga za Jug”, “Zhelanie”, “Golapche”. “Bisera”, is one of his most beautiful love songs, and it is written in the spirit of the folk poetry. Konstantin Miladinov’s most emotional and beautiful song is considered to be “T’ga za Jug – Longing for the south”, translated in many languages.

Every year in the honor of the Miladinov brothers, one of the biggest poetry festivals in the world takes place in their home town. The Struga Poetry Evenings takes place during the last week of August with participation of many poets from all around the world.

If I had an eagle’s wings

I would rise and fly on them

To our shores, to our own parts,

And to watch the sunrise: is it

Dim there too, as it is here?

If the sun still rises dimly,

If it meets me there as here,

I shall flee to other shores

Where the sunrise, greets me brightly,

And the sky is sewn with the stars.

It is dark here, dark surrounds me,

Dark for covers all the earth,

Here are frost and snow and ashes,

Fogs all around, the earth is ice,

And in the breast are cold, dark thoughts.

No, I cannot stay here, no;

I cannot upon these frosts.

Give me wings and I will don them;

I will fly to our own shores,

Go once more to our own places,

Go to Ohrid and to Struga.

There the sunrise warms the soul,

The sun gets bright in mountain woods:

Or bluely darkened by the wind,

Look you at the plains or mountains:

“Longing for the South” analysis by d-r Katerina Petrovska – Kuzmanova

Miladinov wrote the poem “Longing for the South” during his stay in Russia. This is his most important song, and it is also one of the most beautiful elegies written in the 19th century in Macedonia. Nostalgia is also present in his other songs, but in this song he puts an emphasis on the strong poetic expression, leaving the folklore’s style and expression and crossing into romanticism. Although it displays the strong influence of folk poetry, in this song the poet immediately, in the first line paints his homeland using a large number of figures taken from the style of the folk poetry.

“If I had an eagle’s wings

I would rise and fly with them

To our own shores, to our own climes,

If we are familiar with the historical circumstances behind the lyrics then this relation of Constantine Miladinov to his homeland does not surprise. In this period Macedonia is part of the Ottoman Empire. In this first image of nostalgia he highlights the cities of Istanbul and Kukush as the two important and recognizable symbols of the state.

In the second strophe he is spreading the ideas expressed in the first one, and he is expresses his yearning for the sun and light of his homeland. Then he contrasts this picture to the dark image of Moscow. The lyrical hero through these verses, as the object and the subject, starts from the spatial differences here-there, (strange land-countryside), so the verses:

“Where the sunrise greets me brightly

And the sky is sewn with stars.

It is dark here, dark surrounds me,

Dark fog covers all the earth;

Here are frosts and snows and ashes,

“There the sunrise warms the soul,

The sunset glows on wooded heights;

There are gifts in great profusion

Or bluely darkened by the wind,

Look upon the plains or mountains:

Then the following lyrics repeat the desire to return to his native land, but specifying now his native area of Ohrid and Struga.

“Give me wings and I will don them;

I will fly to our own shores,

Go once more to our own places,

Go to Ohrid and to Struga.”

The culminations of all emotions of the poet are expressed through a desire to find the beauty of tranquility at least in death.

In the song “Longing for the South” all thirty-four verses have a strict rhythmical structure: deca-syllabic, divided into two half exactly in the middle with one prominent pause. The song has no rhythm violation. The rhyme is full of sound, containing the keywords which carry the idea and express emotion. This is achieved by distinct musical structure, musical expression, achieved not by counting and calculating, but by fluent and natural composition thanks to the power of sincerity and emotion, and feeling for rhythm and sound. If we read deeply and track the logic, we can throw new light on the basic emotions; the thought of the poet moves from Istanbul and Kukus to Ohrid and Struga. It’s obvious that the geographical range does not provide the only possibility of the homeland, because when the verses are read carefully:

“And to watch the sunrise: is it

Dismal there, as it is here?

If the sun still rises dimly,

If it meets me there as here,

I shall flee to other shores

Where the sunrise greets me brightly

And the sky is sewn with stars.”

We come to the knowledge that the poet places his homeland in the heart of the world. This poetic process in a song is in a higher sphere of poetry: the words of the poet about leaving the homeland give more complex metaphor to his strife to find the sun, light, heat that warms the soul. That indicates to us that Constantine Miladinov was a born poet, who knew how to express his restless feelings by finding contrast in the poetic images, in a gradation which is reflected in the title of the song “Longing For The South”. That tells us that the song is best revealed through the logic of art and the original thoughts the poet brought in the harmony of his verse.