The only residence program in Macedonia, operative since 2013, is the Writers’ Mobility in South-Eastern Europe, “Absolute Modern” organized by Goten publishing. The main donor and partner of the overall program is TRADUKI – a European network for literature and books, www.traduki.eu.

The residency program welcomes six authors per year, on a one-month stay in Skopje. The writers in the residence program satisfy the need to increase the presence of foreign writers and intellectuals in the country, as well as the need for improving the overall cultural climate. The organizers want to see if, the Macedonian cultural scene, as well as the overall surrounding, is capable of inspiring foreign writers to create, to work and to be productive in the country’s capital: the urban conglomerate city of Skopje. The main aim of this program is to revitalize the literary scene, establish relationships within the countries in the region as well as with new countries and literary scenes across Europe, with the goal of improving the mobility in the region. This program also strives to create cultural multipliers and mediators, with the aspiration to offer information and knowledge in the field of promotion of literature.

The authors in residence apart from working on their book or other literary work, are required to present themselves to the public organised by the host.

Anton Baev (1963) was born in the city of Plovdiv. He is the author of a number of books in different genres: seven books of poetry, four novels, two books of short stories, a book of philosophical fragments, etc. In 2009 he obtained a Doctor’s degree at the Institute for Literature at the Bulgarian Academy of Sciences. Anton Baev has worked as a librarian, columnist, reporter, foreign politics observer, editor-in-chief and publisher. In 2016 he was among the establishers of the Plovdiv LIK foundation (a foundation for literature, art and culture), which is focused on presenting the works of the most prominent contemporary Bulgarian authors in different languages. A leading goal of the site of the LIK Foundation (PlovdivLit) is to present contemporary Balkan and European authors, especially in view of the fact that Plovdiv (the second largest city in Bulgaria) was chosen to be the European Capital of Culture for 2019. Anton Baev’s first poetry collection, Snow Signals (1988), was awarded with the national prize for literary debut South Spring.The Whole World and Other Apocrypha (2002), was defined by the critics as the first complete attempt for searching of the cultural and topographical center of Bulgarian poetry within the Mediterranean culture. He is the author of the novel Americans (1997), which had two editions; and the book of philosophical fragments Noah’s Ark (1999). In the autumn of 2017, a selection of stories from the last two books will be published in the German language by Anthea Verlag in Berlin. 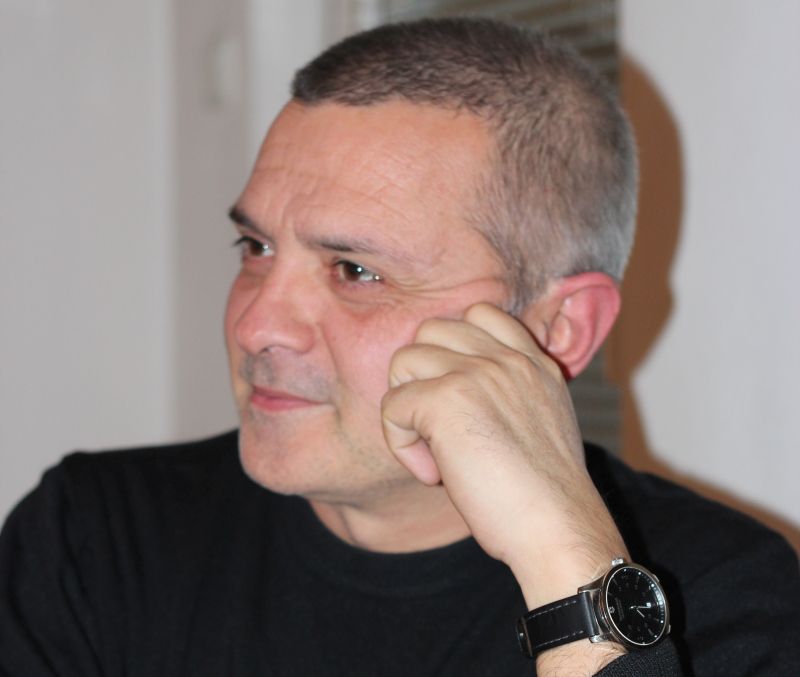 Motivation for staying in Skopje

During the writers-in-residence program Absolute Modern in Skopje,  Macedonia,  Baev works on a novel entitled  The Holy Conception. It is the second part of a fictional cycle, the first part of which is called The Holy Blood, it was published  in 2016, it won the Special  Razvitie Fund prize and it is currently being translated into Macedonian translator.

The Holy Conception is designed  as an experimental novel working out modern approaches to history. The historical  plot of the novel is located  in the territory  of Macedonia  and it includes the struggles for church  independence and secular  education  since the mid 19th century. It also contains some historical events proceeding from those struggles thus, reaching the timeline of the 1920s. The entire plot is presented through  different  points of view and uttered through contemporary voices thus, putting into effect experimental and innovative  narrative approaches. In the so-planned text, the restoration of the past, the investigation of the origins, the fictional process of digging  into the historical  preconditions and studying  the spirit of the original places (genius  loci) will serve as an active background for a modern psychological  and philosophical narrative.

“The Skopje writers-in-residence program will be of great benefit to me, as it will bring me closer to the places of action that are involved  in the novel and it will help me feel the magic of the sacred spaces of Orthodoxy, such as the Prespa Lake, the Monastery of Saint Naum and the Ohrid region. A special attention  will be paid to the Skopje Old Bazaar as a specific socio-cultural territory.

I believe that nothing helps better the authentic interpretation of history in fiction, as the direct contact to the spirit of the places and the straight touch of the land where the events have happened. The beautiful  city of Skopje  itself, which I  have visited a number of times, has always loaded  me with new ideas and emotions  for creative work. A period of four weeks away from my daily joutnalist’s life will definitely  enrich  me with opportunities for meditation and writing, and especially for immersion  into the spirit of the place, the language of the people and the atmosphere of the contemporary Balkans where still a strong and living connection  to the cultural history is saved“, said the writer Anton Baev of the benefits of the residential stay.