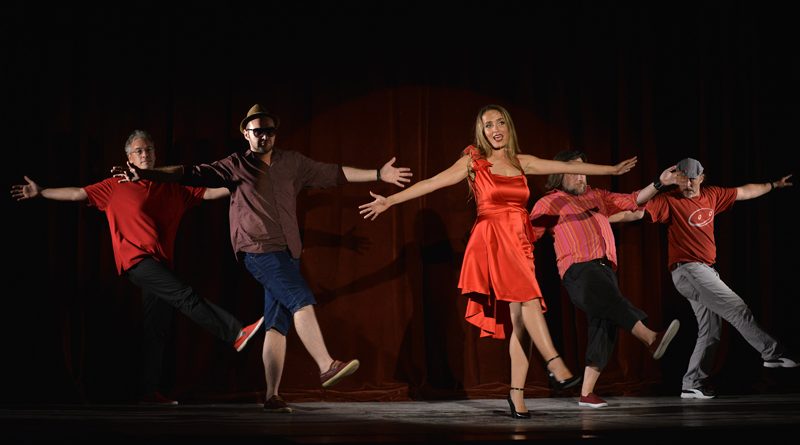 Baklava is one of the most famous Macedonian ethno bands. Their music became a trademark of contemporary Macedonia. When people ask what they can take or bring from the country, Baklava CDs are at the top of the most recommended gift lists. The band has deep roots in traditional music. The core members as well as everyone that played in the band over the years belong to the generation that in the early 1990s rediscovered Macedonian traditional instruments: the string tambura and kanon, percussion dafand dajre, and the woodwinds kaval and flute. Students of arts, philosophy, and literature flooded the classes of the old masters like Pece Atanasovski and Dragan Dautovski creating a new scene of acoustic bands quite unlike the then popular loud rock groups. At the same time the girls rediscovered the old folk singing, from single voice to polyphonic singing in trios or small choirs. The most ambitious among them formed the most important acoustic ethno bands that revived the interest in and the popularity of traditional music. Among them was Baklava. 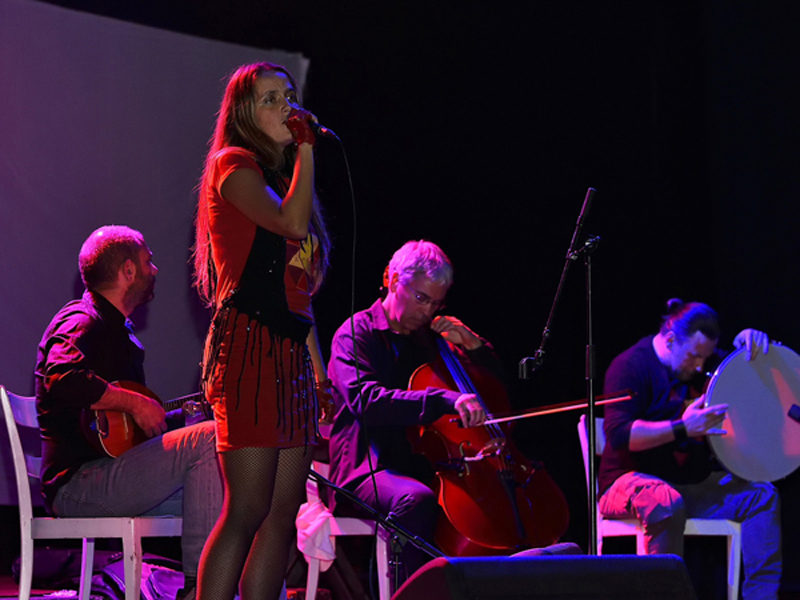 In its early years, the band became recognizable for their re-interpretation of the ethnic. The band changed over the years,but the changes did not follow the changes in the line-up. Rather, they expressed the experimentation and research of its two founding members – Dejan Sibinovski (daf) and Elena Hristova (vocals). The last line-up also features Dejan Teodosievski on the cello and Gjorgji Klincarov on tambura. When you ask the band how they describe themselves they would say that Baklava had specific, minimalist and acoustic sound of World music. They play covers fusing different kinds of music and many languages.

The name itself triggers the audience’s curiosity. It is the name of the famous Turkish sweet, but it is also a local expression for a geometric shape synonymous to diamond and rhombus. As the band name it captures its team spirit referring to the equality of the shape’s four sides. Baklava is also a simplified representation of the complex shape of a cut diamond referring to the different layers from which Macedonian culture is built.

Baklava’s second album was a major test of their maturity as authors. Rather than reconstructing famous folk songsthey now tried to compose original themes based on the rich folk tradition. The re-arrangement of the famous 7/8 beat, the folk rhythms within the minimalistic arrangements of the World music were largely welcomed and supported by the local audience. It was also a step forward from the rest of the scene, as other quality bands, were actually devoted only to re-playing old songs in ethno or jazz style. The sound is primarily composed of the string instruments, sometimes kaval and dajre, traditional female instrument that Elena uses from time to time while singing. Dejan Sibinovski often takes daf.

Their third album Me mankas mucho (I miss you so much) is the most complex where they intertwined traditional melodies from different cultures which had left traces on the Macedonian soil. Apart from the Ottoman and Byzantine influence, they discovered and brought to light the Ladino – language of the once vibrant Jewish community in Macedonia, which was almost exterminated in the Second World War by the Nazis. This album came as a surprise to their fans as it was a radical shift from the traditional Macedonian ethno of the previous two albums – Baklava and Kalemar. With this album Baklava immersed into the Ladino culture of the descendants of the Sefards of Spain and Portugal expelled in the 15th century. Migrating from the Iberian Peninsula they shared and enriched their music. The themes or lyrics remained the same, but they adopted new Balkan rhythms as well as the Turkish maqam. It is these sounds that Baklava re-played in their songs from the third album. Both Ladino and mama style meant strong female voice which excellently suited Elena, who is not only a strong vocal, but a charismatic figure, a real diva on the stage. Following these traditions she combined both the joyful and the sad tonalities in her singing depicting different feelings from love to pride and longing.Her singing and performance are central in each Baklava concert.For her charismatic singing, Elena Hristova is often compared to Loreena McKennit.

Reliance on only a few acoustic instruments demands high performing skills and knowledge as the tones must be clear, clean and loud. Any mistake would be immediately recognized in the calm space surrounding the musicians on stage. Since its first concert in 2005, Baklava changed the line-up a few times, but it seems that the quartet form was the most suitable. Over the years they released three albums and staged many concerts. They were part of the cultural promotion tours organized by the Macedonian Ministry of Culture and guests of important international festivals, not only musical, but also of the Leipzig book fair. But the band has also organized many concerts for the pure enjoyment of the audience.