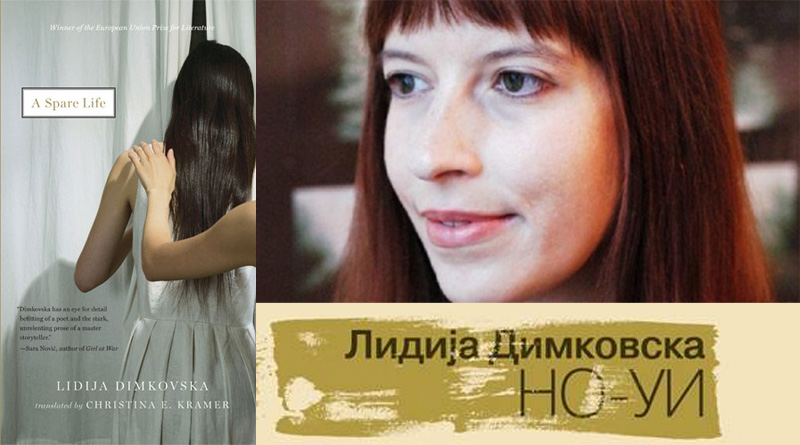 Lidija Dimkovska wasborn in 1971 in Skopje, Macedonia. She is a poet, novelist, essayist, and translator. She studied Comparative Literature at the University of Skopje and earned a PhD in Romanian Literature at the University of Bucharest, Romania, where she also worked as a lecturer in Macedonian language and literature at the Faculty of Foreign Languages and Literatures. Since 2001 she has been living in Ljubljana, Slovenia, as a free lance writer and translator of Romanian and Slovenian literature into Macedonian. She has published six collections of poetry, three novels and edited three anthologies. She received Macedonian awards for the best poetry debut and the best book of prose for her first two novels, Romanian awards for poetry Poesis and Tudor Arghezi, German Hubert Burda Prize for Poetry, the European Union Prize for Literature in 2013 and the European Peter Krdu Prize for Poetry in 2016. Her books are translated intomany languages. She has participated in numerous international literary festivals and was writer-in-residence in Iowa, Berlin, Graz, Vienna, Salzburg, Split, and London.

to be a child of parents killed in war,

to be a child of parents who’ve divorced,

or an African child on a jumbo poster,

to live in an institution for the handicapped,

to have a key to a social housing flat,

to receive aid in the form of flour, oil,

to have a bone marrow transplant donation bank account in your name,

and an auntie who comes once a week to iron clothes and play cards,

to sleep in a cardboard box in front of the parliament

or in the subway of a metropolis hosting a summit meeting,

to be a doll in a traditional costume

instead of a traffic policeman at the crossroads,

what is it like when children adopt parents, and not the other way round,

to down blood quickly before it oxidises,

to be the thyroid gland of the family politics,

to be with people who make you drool,

and others who give you a lump in the throat,

to keep the softest towel for the visitor from abroad,

and the hardest bed for the suicide who has survived,

to be a splinter in God’s eye,

to gather knowledge in a teaspoon of sticky syrup,

that cannot find their pairs,

to feel that neither your skin nor the homeland fit you any more,

to hang on a monastery lime tree

the man who was the last to kiss you on the brow,

to be the topical issue in a low-budget film,

to have a belly-button that draws in before the tongue,

and the tongue before the live measure of the spirit,

to become a tenant of your own existence,

to become aware that life is a non-swimmer’s game

with waves higher than oneself.

Correspondence with the World

Three drawers contain my entire correspondence with the world:

in the first—empty envelopes and stamps no longer valid

to the world I have never written to;

from the world that has written to me at my expense;

in the third—dust caught in spider’s webs:

the only trace of the world that has never answered my letters.

And now, seated on the small chipboard chest,

as my ears burn I realize:

but of course I too am someone’s conscience,

someone must be talking about me,

and as others are in my dream I am in someone else’s,

a prayer, a swearword, or a curse.

Many deaths are linked through my life,

I was an old child with wrinkles

and everything was clear to me, yet I understood nothing.

And now, when I myself have become a letter?

Not the full face but the profile is the essence, the self, the fate:

There is no dialogue between couples, doubles,

the twenty-first century has alienated them. Individual men, individual women,

it’s always their individual way even when the world

is one and only. There’s no such post office where letters can be sent

that won’t come back. Every correspondence

is an autopsy of thought.

World, you to whom I’ve written, who’ve written back to me or not, you knew:

I have never wanted to get far,

as close as possible

to the most distant.

when the mirrors in public toilets

are misted with the breath of political refugees,

when my bathrobe is a frozen flag on the fortress,

to survive November in Graz

with a Cuban family in exile on the floor below,

to cover your ears and in an attack of powerlessness

snatch the wastebin from the hands of the woman

who won’t let go while her husband weeps and the child is kicking him,

and to read Hannah Arendt behind seven doors, hugging the heater.

when life has gone to some other place,

sits in the empty amphitheatre, rummaging through the thorns,

while my ancestors’ remains are no longer there,

it’s only my brain that’s still archaic, my body is of the present;

we always stain our honour ourselves,

and our hands are always stained by someone else.

Bent over the railing at the Schloßberg

I follow with the probe of my eye three shadows on the floor below,

on a stool upholstered with the skin of the man she caresses when she’s alone,

and mother of seven daughters she lovingly calls sonnies.

with the carnivorous plant branching in the bathtub

when a rainbow appears on the bottom of the pot

and church bells break the sound barrier of the fortress —

time is a marathon runner, and I’m not in any shape at all,

bound without wires to the posthumous remains of the city

I’m asking myself whether life will know how to return,

to find the way and energetically ring the upper bell,

or whether every future November

in Graz I will have to survive, dead.

The biggest asylum seekers’ centre is under the ground.

It’s the suicides, the migrants to the other world,

unaccepted, repressed and tortured in this.

from the periphery to the centre and vice versa,

three meals a day and a daily pass for a walk.

Asylum seekers have a standard size tag on their wristbands.

But look, the ordinary dead go on hunger strike

against the surplus of suicides around them.

They don’t want asylum seekers next to their neat homes,

bones broken from falling and bellies swollen from drowning.

Instead of scarecrows they plant crosses in their green gardens

for those who died against God’s will. The asylum seekers

are confused and angry, with one foot dragging backwards all the time.

Some have forgotten to leave a message, others to kiss their daughter,

some have left a suit at the dry cleaner’s, others have not made their wills,

some haven’t cancelled their journeys, others not made an appointment with death.

And now they are here. With interpreters in the corridor

and folders in their hands they wait to be seen by the asylum officer.

Nationality, sex, religion. Many have fathers,

but no fatherland. Some are allergic to ploughed land,

and unable to kiss their soil, had to depart under the ground.

Some were life-long fugitives from themselves,

with no one to pay for pills to stop them ageing.

Some have squandered their misfortune too, not only their good fortune.

Others have not made love to the love of their life for years.

Some have been killed by their nearest and dearest not with a knife but a needle or forceps.

Among them are people who are alive only after they are dead.

The asylum seekers’ centre is full, fenced off with barbed wire from the world of the ordinary dead.

I arrived yesterday. Got two passes.

During the day I’ll be in the asylum seekers’ centre,

and at night in the home of the ordinary dead.

I don’t know which I won’t come back from.