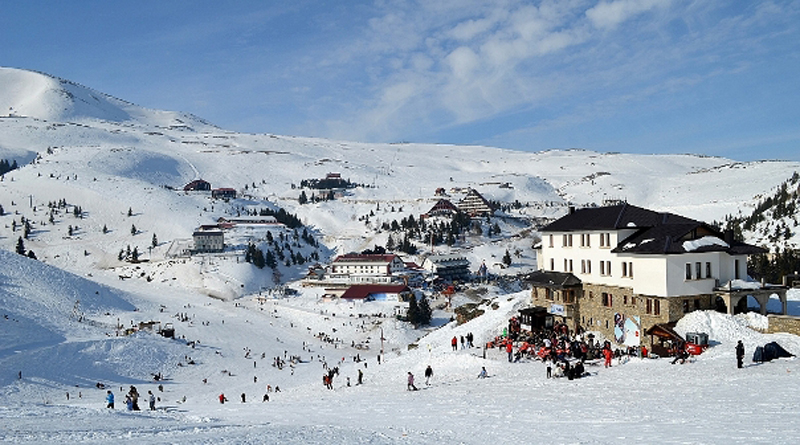 Residents of Skopje, Tetovo, Gostivar, and even Kumanovo enjoy the privilege of having one of the country’s biggest ski resorts in their vicinity.Popova Sapka (pronounced shapka) is situated in the middle of the Sar Planina mountain just above the city of Tetovo. Sar (pronounced shar) Planina massif extends for 80 kilometers and hasthe approximate height of 2200 meters. On a clear day its impressive snow covered peaks are visible even from Skopje. The cold Sar winters with average temperature just below zero degrees C allow for a snow that lasts for four months. The superb view from Popova Sapka opens out towards the neighboring mountains of Jakupica and Solunska Glava (2540m), and also towards the Polog Valley. The Eyes of Sar Mountain are glacial lakes that are special characteristics of this mountain. There are 25 permanent lakes, over 150 temporary, as well as 150 smaller pools.

The ski center is only 18 km of good road away from Tetovo and 53 km from Skopje. The road up passes through picturesque mountainous villages of Gajre, Lisec, Sipkovica and nearby Brodec. The total length of ski slopes is 10 km. The total capacity is 8,000skiers per hour. Three of its slopes fulfill the International Skiing Federation standards (FIS), while the others are designed for beginners and recreational skiers. Popova Sapka has 7 skilifts and 4 chairlifts, some parallel to each other. There are single and double drag lifts. The lowest skislope is at Teteks skilift at 1,708 meters, while the highest is Ceripasina chairlift at 2,510 meters. There used to be a cable car lift which started from the city, near the famous Arabati Baba Teke, stretching 7 kilometers up to the Ski Centre. In 40 minutes the gondola would cover this distance. But it suffered heavy damage during the armed conflict in 2001 and was never repaired. A new cable road is being constructed at the resort.

Today Popova Sapka is a large ski complex. There are many hotels: Inex, Slavija, Teteks, Jelak, Elektrodistribucija Tetovo, Konak. The hotels built during the socialist times have been renovated and are still in good condition to welcome tourists. “Popova Sapka”, “Teteks” and “Slavija” have a well known tradition of hospitality while several smaller hotels were built in the last decade. “Popova Sapka”is the biggest hotel in the resort with 140 rooms, but the Hotel Slavija, above the Popova Sapka hotel, is better appointed and has an indoor swimming pool. The skiing village includes around 250 to 300 chalets for rent. Skischools and equipment hire can be arranged at hotels and in the village. Several years ago a monastery complex was built by the church dedicated to St. Naum. There is a hut on the upper slope where visitors can buy some tea, sandwiches and other products. Italian food is served at Casa Leone in the village, which has amazing views from its terrace.

Ceripasina is one of the most amazing paths in the resort. The biggest peaks are next to it: Titov Vrv, Mal Turcin and Bakardan. From there the horizon spreads to the highest mountain points of the Balkans – Kopaonik in Serbia, Rila and Pirin in Bulgaria, Olympus in Greece. Popova Sapka meteorological station is situated just above Ceripasina chairlift near the border with Kosovo at an altitude of 2,525 meters above the sea level. Ceripasina ski path is where the famous Sar Planina Cup takes place. Sar Planina Ski Cup is one of the most exciting winter events. During one of the February weekends, Popova Sapka is the place to be. It is overcrowded with people, including the President, members of the government, local mayors, politicians, and many international ski professionals. Amateur enthusiasts also participate and celebrate one of the oldest organized ski traditions in the Balkans. This event was held for the first time in 1947. The best skiers from Macedonia together with foreign participants compete for this cup. Since 1977, the Cup has been included in the European Ski Association for the competition “European  Cup”. Apart from the cup, the winner traditionally is awarded the legendary dog, the endemic powerful Sarplaninec shepherd.